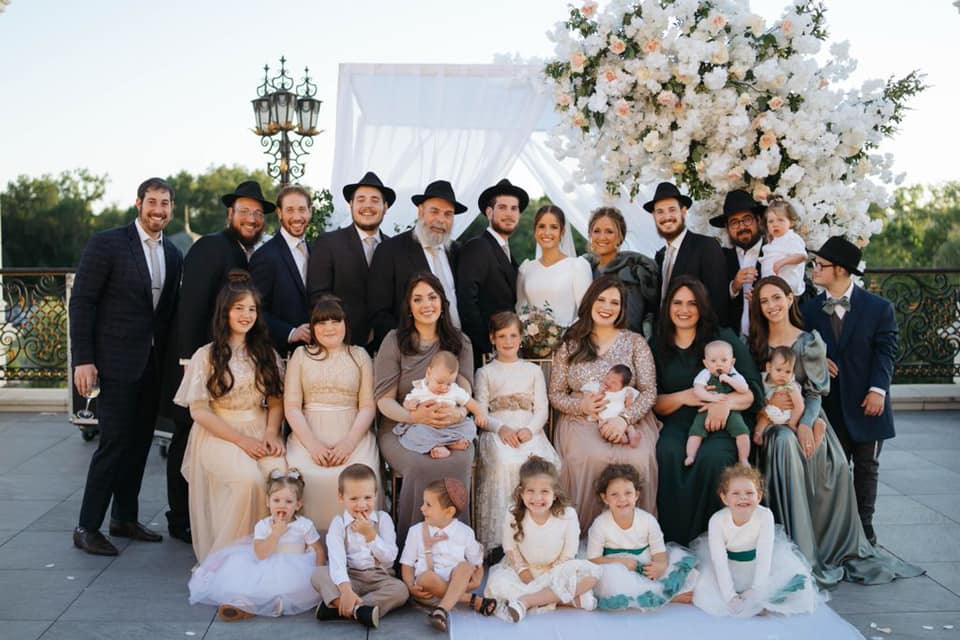 The state of Florida boasts close to 300 shluchim, 12 of them in Orlando alone. We were the twelfth shluchim to the state and the first in central Florida. We were also the first couple to benefit from the Rebbe’s campaign of “Shliach oseh shliach.”

We’d been approached by a Floridian shliach, who invited us to spend a day to see if Orlando would be the right fit for us. After our initial visit, we wrote to the Rebbe, asking for a bracha and approval to officially open a Chabad house in Orlando. We submitted the letter on Hoshana Rabba of 1984. Just two days later, during the Simchas Torah farbrengen, the Rebbe announced the launch of a new campaign called “Shliach oseh shliach;” one shliach creating another. The Rebbe promised to pay two-thirds of the salary of any shliach brought down by another shliach. Immediately after Simchas Torah, the Rebbe answered our letter, telling us to be “shliach oseh shliach,” and to meet with Rabbi Chadakov, his secretary.

Our first effort was to find a creative way to meet people, establish a connection, and form lasting relationships.

We found a Jewish printer who graciously agreed to print beautiful refuah shleima cards for us. We paired them with flowers, donated by a wonderful Jewish florist. We then visited every hospital in the city, dropping off a get-well-soon package by every Jewish patient. For some of them, we were the only visitors they got all day. Their faces lit up when we came into their rooms, and some of the friendships we formed have lasted to this day.

Today, Orlando boasts nine Chabad centers, two day camps, three Hebrew Schools, two Chabads on Campus (including construction of a $5 million dollar facility at UCF), a mikvah, and another in the planning stages. Each Chabad center serves its area with daily and weekly services, classes, programs, and activities for all ages.

Those first years were very tough. We quickly ran out of the money we’d received as wedding presents. The credit card offers mailed to us every day looked so tempting; so easy. Buying and buying, and worrying about the cost later? It sounded like a dream.

It was much closer to a nightmare.

We opened dozens of credit cards and fell heavily into debt. It weighed on my mind constantly. Things came to a head when I went to the hospital, terrified I was having a heart attack. The doctor assured me that my heart was fine, baruch Hashem, but I was having panic attacks. He asked if anything, in particular, had been stressing me out.

When I got home, my wife and I decided it was time for plastic surgery. We sat at the table, cutting up each of those innocent-looking plastic cards, not leaving even one for emergencies. I immediately felt a lightness I hadn’t felt in months.

Our first hurdle wasn’t long incoming. It was already erev Shabbos, and we didn’t have much food in the house. Baruch Hashem, we had a chicken in the freezer, but we needed a few more staples. We scrounged around every couch cushion, under every piece of furniture, and collected $8.00 in loose change. With this windfall, we headed off to the store. We bought matza, sardines, some drinks, and potatoes. Our total came out to $7.98. Placing the last two pennies in the pushka, we prepared our simple Shabbos meal.

That night, as my wife and I sat across the table, feasting on sardines and matzah, I told her, “This is the first Shabbos I can actually fully enjoy. I know I don’t have to pay it off.”

With incredible brachos from Hashem, we dug ourselves out of the hole, little by little.

A national Kashrus organization ran a product through a plant in Orlando. They offered me the position of mashgiach. I was only too happy to accept. Now, we had a steady income and could learn to budget properly.

I’m still active in the hashgacha industry. One of the products I certify is a key ingredient in kosher l’Pesach Coke.

It was a very long day. I finally fell into bed in the early hours of the morning, entirely exhausted. The phone woke me up just an hour later. It was the hospital’s non-Jewish chaplain.

“Sorry to bother you, Rabbi Dubov. A patient went into early labor, and, unfortunately, lost her baby. She’s inconsolable and requested to see a rabbi. Are you able to come now?”

Of course, I immediately jumped out of bed and rushed to the hospital. I was a young, inexperienced shliach. I had no training, no coaching, no life experience to rely on. All I had as I walked into the room was the talents Hashem gave me, and the kochos of the Rebbe.

I followed the advice Rabbi JJ Hecht OBM gave me, when I worked for him on the Released Time program: “A rabbi doesn’t need to know how to talk. A good rabbi knows how to listen.”

She talked for hours. I don’t remember what I said, but Hashem must’ve put the right words in my mouth, because the couple thanked me for being there in their time of need.

At dawn, as I prepared to leave, now emotionally depleted as well as physically tired, the chaplain accompanied me outside.

“Thank you very much for coming,” he said, shaking my hand.

“Rabbi Dubov, I called every rabbi on the roster before I called you. You’re the only one who showed up.”

A few weeks later, I attended a rabbinical meeting of all local rabbis. I asked each of them if they remembered receiving the hospital chaplain’s call. Most of them did.

One rabbi answered, “Sholom, I am paid a salary by my congregation. They expect me to fulfill my responsibilities which include being available for any members of the synagogue whenever they need me. I can’t function properly and be available for my people if I don’t get a good night’s sleep!”

As the Rebbe taught, his answer sums up the essence of Chabad. For us, every Yid is “our people, our congregation.” We’re always ready to run to the aid of any Jew that needs us, no matter when, why, or who. This is what the Rebbe demanded of his chassidim and his shluchim.

Millions of visitors enjoy the magical “It’s a Small World” ride in Orlando’s Disney World. It’s a gentle boat ride through a canal, with animatronics dressed as various countries and cultures set up on the sides.

I received a memorable call from some Disney executives, who asked me to step in as an advisor. They’d received multiple complaints about the lack of Jewish or Israeli representation in the ride’s animatronics, and were ready to add a Jewish couple to the lineup.

“Before we begin, we should tell you there are many restrictions,” they warned me. “There can’t be any religious symbols or lettering in the display.”

I brought a book of illustrations of Jewish life, and we flipped through the pages together.

“What’s this?” they asked, stopping on a page depicting a chuppah.

“That’s a Jewish wedding ceremony,” I explained. “The canopy is instantly recognizable to anyone Jewish.”

They had a lot of questions. What are the strings hanging out of the groom’s pockets? What does the Hebrew lettering mean? Why does the bride circle the groom? What would the typical Jewish groom and bride wear under the chuppah?

I answered all their questions and directed them to a Judaica store for a stemmed becher goblet, hat, and tzitzis. I received hundreds more calls over the next few months, as a team of 70 people worked to make the Jewish animatronic display.

My wife and I were invited to the grand opening of the newly remodeled ride. We were so happy to participate in making a kiddush Hashem on such a large scale.

Mr. Cohen was one name on the list of Jewish patients in the hospital. When I came into his room, I saw he was very ill.

We spoke for a bit, and then I noticed the cross around his neck.

“No. A nurse gave it to me and told me it’d make me feel better.”

I went to find the nurse and explained to her that, while her sentiment was nice, Mr. Cohen was Jewish. “Having a cross around his neck is bad for his soul,” I explained. “Please remove it.”

“No,” I said, firmly. “Every moment it hangs around his neck impacts his soul. I want to pray with him. Can you please come to take it off now?”

She was startled by my insistence, and followed me into Mr. Cohen’s room, removing the offending necklace.

“You’re a Jew,” I explained to the suffering man. “You have a precious neshama! When is the last time you put on tefillin?”

He began crying. “I’ve never put on tefillin in my life.”

We put on tefillin and said Shema together - for the first time in his 80 years.

He was very moved by the experience. I returned to the hospital the next day to check up on him. Mr. Cohen’s neshama, just one day after putting on tefillin for the first time, returned to its Maker.

“Can we please come for Shabbos?” asked Kelly. “My husband, Josh, has been a lifelong atheist. He was just introduced to some Jews for J missionaries, and now he thinks he’s found religion! I don’t know what to do about it!”

They came for Shabbos, and I noticed Josh quietly observing. I knew allowing him to take the initiative and approach me with questions would make him more open to hearing what I had to say.

He eventually came over to me and we had a short discussion. I could see he wasn't convinced. We continued the meal, and I watched him out of the corner of my eye. Josh was watching the other guests, wiping tears from his eyes.

“What impacted you so strongly?” I asked him.

“You had your kids read a dvar Torah to the table,” he explained. “And then you stopped your son on one detail of what he said. You had a whole discussion about that one little point. It showed me that there’s so much I don’t know. There are depths to the Torah I never imagined.”

As we sang niggunim, I saw Josh’s demeanor change completely. He was enthralled by the singing. You could almost see the chords touching his neshama.

The next day, Kelly told me Josh wanted to learn Torah - the original version! We put tefillin on, and I made sure he had the number of the shliach from his hometown. I later heard that Kelly and Josh turned their lives around and became completely frum.

Gabe had been coming to events and shiurim on and off for years. He told me he would come to one Rosh Hashana service, but he didn’t want an aliyah.

When I saw him come in, I didn’t want to pass up the opportunity, so, despite his reluctance, I called him up for an aliyah.

“Do you know how to read the blessings?” I asked.

“Yeah, sure,” he said. He held the atzei chayim in his hands and began reading the first bracha. His voice was choked with tears, and the entire shul listened in surprise as he cried his way through the brachos.

After davening, I asked what had made him so emotional.

“In the Reform Temple I usually attend, prayers are just a social exercise. Here, I feel the real deal. When you called me up, I realized I was being called before G-d.”