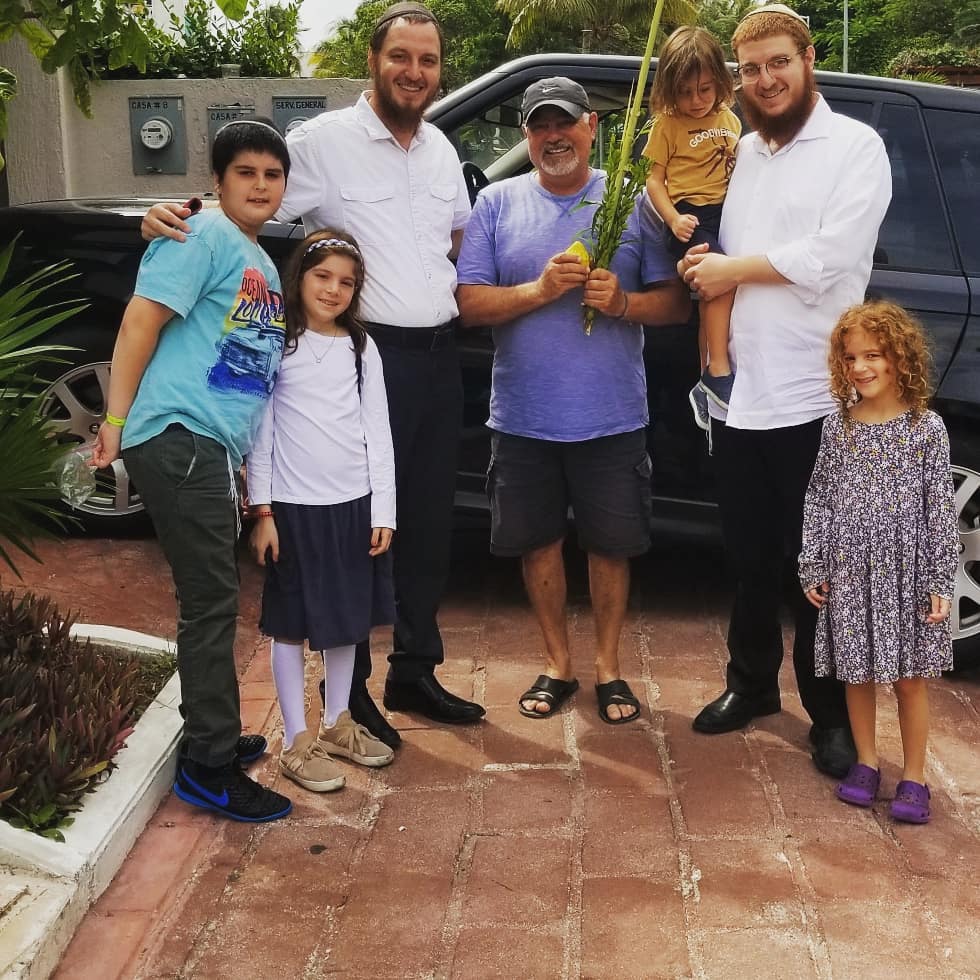 Cancun is known as one of the most popular tourist destinations in Mexico. Its international airport receives upwards of 25 million visitors each year. You may be surprised to learn that Cancun only just celebrated its 50th birthday; before being founded in 1970, it was nothing more than an uninhabited little island.

So, when Rabbi Kotlarsky, of Merkos, informed us that residents of Cancun had requested programming and services from Chabad, we weren’t familiar with its geographical location or its needs.

When we flew in to run some recon, we headed straight to the mall. We went from store to store, meeting owners and customers, asking if anyone was Jewish. The first Jew we met was Sylvia, a lovely elderly woman. We started speaking in Yiddish, and her eyes filled with tears as she was reminded of her childhood home.

A few stores later, we laid the first tefillin with Mr. Lavier, a French clothing store owner. He and his family ultimately became steady friends and supporters of our Chabad house. Their children attended Hebrew School, and they regularly came to shul and programs.

The next day, we continued our search in offices, hospitals, and care centers. Martha, who we met in the hospital, gave it to us straight: “It’s very nice you came here, but I wouldn’t advise you to stay. No one comes to Cancun looking for Yiddishkeit.” She told us that, since she’d moved to Cancun, she’d never encountered more than seven Jews gathered together at once. When Martha walked into our first event and saw at least 50 people there, her jaw dropped.

We’d already committed to moving to Cancun and had written to the Rebbe about it. We were confident we’d have strong financial and logistical support, and busied ourselves making lists and packing. Certain developments showed us financial support wouldn’t be as easy to come by, and we started to doubt if it was the right move after all.

I spoke to my mashpia who advised me to continue with our plans. “That was just the carrot dangling, to tempt you there and show you what needs to be done. Now that the carrot’s gone, you can go on shlichus for the right reasons!”

We continued, full speed ahead, and moved to Cancun that summer. Our first major event was Rosh Hashana. We advertised as much as we could, but didn’t expect much from the (still small) city.

Over 250 people attended davening the first night. We were caught totally off-guard! My wife had prepared Yom Tov delicacies for four meals, but we completely ran out of food that first night. We had to scrounge around the hotel pantry, looking for kosher food we could serve. We were blessed that lox and vegetables were a kosher staple for the hotel’s morning breakfast.

Baruch Hashem, since then, although we’ve had the continued privilege of hosting large crowds, we’ve never run out of food so quickly.

We hosted a Pesach seder for 500 people. The room was pumping with energy, and it felt so rewarding to lead a seder for such a large crowd. As the night wore on, people trickled out. There was a mass exodus after Shulchan Orech. We encouraged everyone who remained to join together at the front tables, and continued the seder. In a way, the intimacy of the second half of the seder felt more meaningful. The energy wasn’t as loud, but each word felt more impactful.

As we ended the seder, there was one Jew left to finish it with us. He sat there, his Hagaddah opened to the last few pages, and it suddenly struck me: This is what our shlichus is about. The individual. Not the crowds of hundreds, but the impact we can have on one person. Will he marry Jewish? Will he commit to mitzvos? How can we reach this one person?

So, while we still host events for large crowds, we focus our energies on weekly shiurim, learning sessions, and one-on-one meetings. We know how powerful each precious neshama is.

Although many tourists visit the area, much of our shlichus is focused on the Jewish locals. There are a couple hundred Jews, for whom we provide all Jewish and educational services: shiurim, meals, and Hebrew school, as well as our Gan Yisroel summer camp for the local Jewish children.

During the winter, Cancun is inundated with “snow birds,” those who spend winter in tropical vacation homes. Cancun strips them of their inhibitions, and allows them to open their minds to experiences they’d never agree to at home. For many of them, Cancun is the place where they attend shul every week, even if there are 7 shuls within walking distance back at home.

Mitch lives in New Jersey, minutes away from any kind of shul he could ever hope for. He doesn’t attend any of them. When he comes to Cancun in the winter, his guard is down, and he’s more receptive to Yiddishkeit. He comes to shul every week, and we’ve even begun Hebrew reading lessons together!

I’ve known Mikaela since she was a little girl. I taught her in Hebrew school for years, introduced her to the alef beis and Yomim Tovim, and gifted her with her own siddur.

As Mikaela grew up, she slowly drifted away, busy with her social life, school, and her personal ambitions. She started to play sports professionally, and traveled often for games and tournaments.

I run the Cancun chapter of CTeen, a teen club. The highlight is the yearly Shabbaton in Crown Heights. Although I hadn’t spoken or seen Mikaela in years, I really wanted her to join the Shabbaton.

“I have a game in Baltimore that week,” she told me.

“But that’s perfect!” I answered. “You can just extend your trip and join us in New York!”

Mikaela’s parents kept coming up with excuses, but I convinced them out of every one of them. I even arranged a chaperone to meet her in Baltimore and bring her to New York.

Mikaela and her friends were graciously hosted by Rabbi Kotlarsky and his wife. Mrs. Kotlarsky showed Mikaela how to wash negel vasser. It was her first Jewish experience in years.

A day or two after the teens returned home, Mikaela’s mother called me.

“Mrs. Druk,” she began, nervously. “Mikaela’s been… different since she got home. She’s refusing to eat certain things, insisting they’re not kosher. What will come next?”

My husband overheard her nervous question, and smiled.

“Tell her that true Yiddishe nachas comes next,” he whispered to me. “Nachas that nothing else can compare to.”

One of Mikaela’s friends was similarly affected by the Shabbaton. When she came home, she immediately broke up with her non-Jewish boyfriend.

During COVID, travelers who wanted to enter the US or other countries had to quarantine for two weeks. Since Cancun is so close to the US border, we hosted many of these travelers over those crazy two years.

I have a good friend who comes for Shabbos at least once a year. The Shabbos that he and his wife visited, I was also hosting a European family who was quarantining in Cancun before flying to New York for their daughter’s engagement. We all farbrenged and spent a wonderful Shabbos together. A short while later, both of their children were redt a shidduch for each other. Because of the mutual friendship, and COVID restrictions, the couple dated in Cancun, and when they got engaged, their lechaim was held in our Chabad House. In an amazing twist of hashgacha pratis, a bayis ne’eman was built. We were privileged to be Hashem’s messengers, bringing this couple together.

Every Shabbos, we host between 50-250 people for the Shabbos meal.

In the first year of our shlichus, we found ourselves at the Shabbos table without a single guest. It had been weeks of non-stop hosting, and that Shabbos was our anniversary, so we made peace with our guest-less table. I picked up the becher to make kiddush, but was interrupted by a knock on the door. A group was standing by the door, and we warmly welcomed them to join us.

That was the only Shabbos in our 16 years of shlichus that we almost didn’t have guests.

Irving was the guy to know. He was very wealthy and influential. Unfortunately, he had a falling out with his previous community, and was very resentful towards anything having to do with Yiddishkeit.

I visited other Jews who worked in his office, but when he saw me in the parking lot, he’d say, “Seeing you gives me a headache.”

“That’s why I have tefillin for the head,” I joked, but Irving was so antagonistic, he didn’t even crack a smile.

We were looking at properties to build a Jewish center. I had some theoretical options, but no money to put down. I made an appointment with Irving, hoping he’d be generous, despite his clear animosity.

Before the appointment, my wife and I discussed whether we should ask for $5,000 or $10,000, debating the merits of each.

I arrived in time for my appointment, but the secretary told me Irving was out and I should return a few hours later. I returned home, desperate and despondent. I wrote a heartfelt letter to the Rebbe, asking for a bracha that Irving should be kind, and that we should be able to form a connection.

When I came back to Irving’s office, he shook my hand and asked, “So, what do you need, Rabbi?”

I was taken aback by the kindness in his tone. We’d never really spoken before, and the interactions we did have were laced with unpleasantness.

Irving agreed, and we made an arrangement. Since then, we’ve become friends, and I visit Irving in his office often. He’s since been a pillar of support in our activities, and the growth of our Chabad Jewish Center.

Before we moved, there were two families who had many preconceived notions about frum Jews. We met with them and they warned us not to move to Cancun - that we weren’t welcome.

Over time, they saw that we were just trying to help out Yidden whenever and however we could, and their antagonism slowly faded.

Both families are now close friends and active members of our shul. One of the women goes to mikveh every month, and their children were enrolled in our camp and Hebrew school. Their daughter is now leading a frum family life in New Jersey.

The other family is also very involved. He’s my right-hand man, who assists me with various medical emergencies. Sincerity and genuine warmth are the only ways to melt the walls that surround the pintele Yid.

Vincent attended classes, but he was very cynical. He challenged me on everything, and was relentless in his questioning.

Over the years, he mellowed out, accepting the truths of the Torah. I started putting tefillin on him, and eventually, he asked for his own pair.

A short while later, he asked me for another pair of tefillin.

“Why? Don’t you already have a pair?” I asked him.

“Well, last week you were teaching us about the mishkan. You explained that every Jew is a mikdash me’at - a microcosmic mishkan. That’s why I want another pair of tefillin - one for my home, and one for my office.”

Like the drops of water that erode a stone over a long period of time, the words of Torah penetrate the neshama of a Yid.