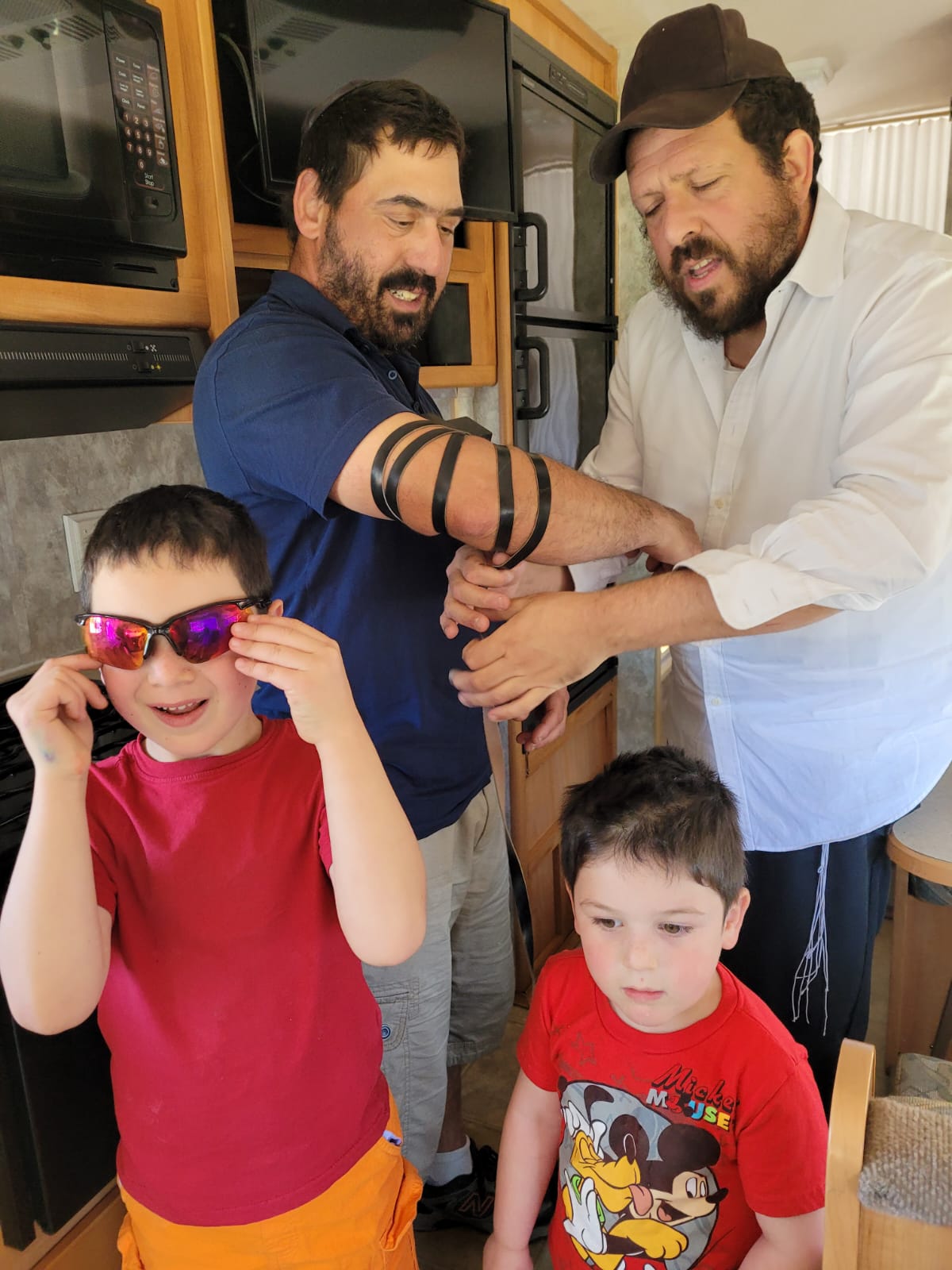 The Shlichus That Chose Us

Bakersfield was founded by Thomas Baker, who famously allowed anyone traveling through California to let their animals graze in his fields. Our city’s foundation is chessed and hachnosas orchim.

We’d never even heard about Bakersfield until two weeks before we were asked to move here. We were driven and motivated; Tenacity got us our shlichus.

That tenacity came in handy as we rushed to raise seed money to start our shlichus. It was exhausting, knocking on door after door in Crown Heights. Everyone we approached either had relatives on shlichus, or were already supporting other shluchim. The donations rolled in slowly - $18 here, $36 there.

My chavrusa in yeshiva was Ariel Ravnoy, z”l. As I was walking through 770, I saw his father. I approached him for a donation, vaguely remembering that he lived in Los Angeles. I wasn’t even sure how far Bakersfield was from Los Angeles, but I hoped the connection might prove useful. He heard me out and immediately wrote out a check for $1,000. I was elated. I ran home, holding the check aloft in the air, and excitedly showed it to my wife.

“It’s a miracle! It’s a sign from shamayim that we don’t need to knock door-to-door anymore! We’re moving on shlichus!”

Our first move was to send out postcards to any Jewish-sounding last name in the Bakersfield area. Every Cohen, Katz, and Goldberg received our colorful flier, announcing Rosh Hashanah services in a hotel.

We were happy to see that the mailing did its job. Our High Holiday service was well attended, and we met many Jews.

“This postcard saved my life!” she told us. “I made a pact with G-d and decided to end my life. That was the exact day I received your postcard. I knew it was a sign from G-d that He wanted me to live!”

This was quite the introduction to shlichus! We had the zechus of saving a life! Years later, we were able to help Hannah again, although this time, we were focused on saving her eternal life, rather than her physical one. I was out of town for a family simcha when Hannah passed away. I called anyone I could think of, and asked them to help bury this meis mitzvah with dignity and honor. Instead of dying alone, Hannah was accompanied on her final journey by my wife and a minyan of chevra kadisha members, who recited kaddish for her. That postcard had, indeed, saved her life.

Jerry was born and raised in Bakersfield. He was one of our earliest members, and he brought his whole family along. His father loved to chat and we’d sing Yiddish songs together.

The family was traditional, but more theoretical than practical. I started learning Tanya with Jerry, and his pintele Yid was awakened. He began to keep Shabbos and wanted to make a stronger commitment to Yiddishkeit. He decided he wanted to donate a sefer Torah to the Chabad House. He was determined to see it through, even selling his car to raise enough money. We couldn’t afford a new Torah, but the history of our Torah made it even more precious. It had belonged to a shtetl, pre-WWII, and had been lovingly restored by an expert sofer.

Jerry and I flew to New York to collect our sefer Torah and escort it to its new home. That trip to New York was also Jerry’s journey to Yiddishkeit. He watched in silent awe as every passerby on the streets of Crown Heights stopped to give the Torah a reverential kiss. As we strode through the JFK terminals together, taking turns holding the Torah, every Jew who passed us stopped to kiss the Torah. The innate love and respect for the Torah he saw displayed made an indelible impact.

Jerry and his family became fully frum. They had a lot of mesiras nefesh for their Yiddishkeit. His children attended Chabad schools in Los Angeles, and his daughter is now married to a talmid chacham, and runs a Chabad House of her own.

Our community is simple and warmhearted. They give what they can, but I knew I needed an alternative source of funding. I applied for a chaplaincy position in a nearby prison. I stayed there for eleven years. During that time, I met many Jewish inmates. It showed me that there’s value and potential in every single neshama, no matter how low they’ve sunk in life.

There was one inmate, Malcolm, who was sent to the prison infirmary for stomach pains. When I returned after the weekend, I asked to visit him. “He died,” I was told. I was shocked. I looked up his personal details in his file and contacted his family. They were well-to-do, and influential.

“We’re cremating him,” they replied, curtly.

I knew I couldn’t let this happen. I called his brother and pleaded with him.

“I looked you up,” I told him. “You’re the president of your synagogue. You’re on the board of Jewish organizations. You know better! You cannot cremate your brother!”

“We have no more time or money to waste on him,” his brother answered. “He was the black sheep of the family and caused us no end of embarrassment. We’ve already paid the deposit for the cremation and we’re not spending another cent.”

“Your brother was a special neshama,” I responded, in a quiet, calm voice. “He had an active yetzer hara that drew him to make bad decisions. He struggled with temptation - like all of us. If I can pay for it, would you agree to give your brother a Jewish burial?”

“Do whatever you want. We don’t care one way or the other.”

I inquired, and found out his body was in a crematorium in Bakersfield, slated for cremation at any moment. I rushed straight over there and breathlessly asked about Malcolm’s body at the front desk.

The receptionist shrugged her shoulders flippantly. “Sorry Rabbi. It was a weekend transfer. I think Jose has already… you know.”

I rushed inside and approached the furnace. Each body was in a labeled drawer, and with a pounding heart, I examined the names. I pulled open Malcolm’s drawer and identified his remains.

“Sorry Jose. This one is not going in the oven today,” I said, and walked back out to complete the paperwork.

I arranged a levaya for the meis mitzvah in the Los Angeles cemetery. His entire family showed up, eulogizing and crying for the son, brother, and uncle they’d dismissed all his life. Malcolm’s body was spared the crematorium, and was buried according to halachah.

Los Angeles is a two-hour drive from Bakersfield, but it’s the closest mikvah. We had no choice but to send Wendy there. She drove back late at night, and as she crossed over the mountains, she got caught in a snowstorm. When she finally got home, she was scared and traumatized from the drive.

That gave us the impetus to finally build a mikvah of our own.

I walked out to the backyard, grabbed a shovel, and hit a spot.

“Mazal tov,” I told my wife. “We just celebrated the groundbreaking of our mikvah.”

When my gardener came the next day, I pointed to that spot and asked him to dig a hole. He came to me an hour later to show me his progress.

“Is that good, rabbi?” he asked, pointing to the 3-foot hole he’d dug.

“I’ll call reinforcements!” he said. Thirty minutes later, his cousin showed up with a tractor, and we soon had a mountain of dirt piled in the yard. I snapped some photos of the major construction project and showed it to an organization that helps fund new mikvaos. They were impressed with how much progress I’d already made, and helped us build a beautiful mikvah that’s still in use today.

A local community leader bared his soul, telling us how desperately he and his wife wanted children. They’d tried everything, he told us, but it had been six years and they were no closer to achieving their dream.

“Why don’t you try the mikvah?” I suggested. “It’s a powerful vessel to draw down Hashem’s blessings.”

His wife visited our mikvah a short while later. A year after that, they celebrated the arrival of a beautiful baby.

When we were still young greenhorns, a man approached us, crying that he’d lose his house unless he immediately paid his mortgage. Not knowing any better, we listened with sympathy. He needed $5,000 or he’d be foreclosed on. For us back then, a young, struggling couple, $5,000 was a very large sum of money.

Dismissing my wife’s warnings and my own misgivings, I ordered a cash advance from my bank and paid it directly to the man’s bank. His house was saved, but we were now liable to repay a loan we could never afford in the first place, with an enormous interest added, to boot.

Did we do the wrong thing? we agonized.

Later that week, a check arrived in the mail from an unexpected source. It was the largest donation I’d ever received - $10,000. I took it as a sign that Hashem was pleased with our actions.

Ilan was a teen when he got in trouble with the law and was imprisoned. He had issues with authority, and acted out in front of a guard. That landed him in solitary, and after that, into a cell with hardened, violent criminals. I managed to remove him from that cell and visited him as often as I could.

Ilan loved chanting Tehillim in his traditional Sefardi tune. When the other inmates would mock the chant, I’d yell back at them, “Where is your respect? I’m a rabbi! We’re reciting the Book of Psalms!”

As Chanukah approached, the age old question of allowing inmates to light actual candles came up again. It’s illegal in the state of California for inmates to light a fire. I fought and fought and finally won the warden’s permission to light with Ilan. Every night, after hosting a public menorah lighting and then lighting with my family, I’d drive an hour to the prison and light with Ilan. I brought fresh latkes with me, telling the warden it was essential for Ilan’s rehabilitation.

I took my kids on every child’s dream outing - a car wash! While we waited for the detailing to be done, we topped off an excellent day by going to the dollar store across the street.

As we crossed the street, a man poked his head out of one of the waiting cars.

“Hey, landsman!” he called out.

“What’s your name?” I called back.

“And what’s your number?”

He shouted his number as the light turned green and he sped off. I have a good memory for numbers, and I quickly saved it in my phone.

I called him the next day and asked when he could meet for coffee.

“Whenever you want,” Robert answered.

He’d been following us for a while, admired our work, and was interested in experiencing it for himself.

Fast forward 20 years. Robert and his family have found a home, a place where they feel cherished and inspired. He puts on tefillin every day, studies regularly with me, and supports us generously.

The unexpected encounter was a reminder of something I knew the minute I came to Bakersfield - we may not have chosen Bakersfield, but it chose us.