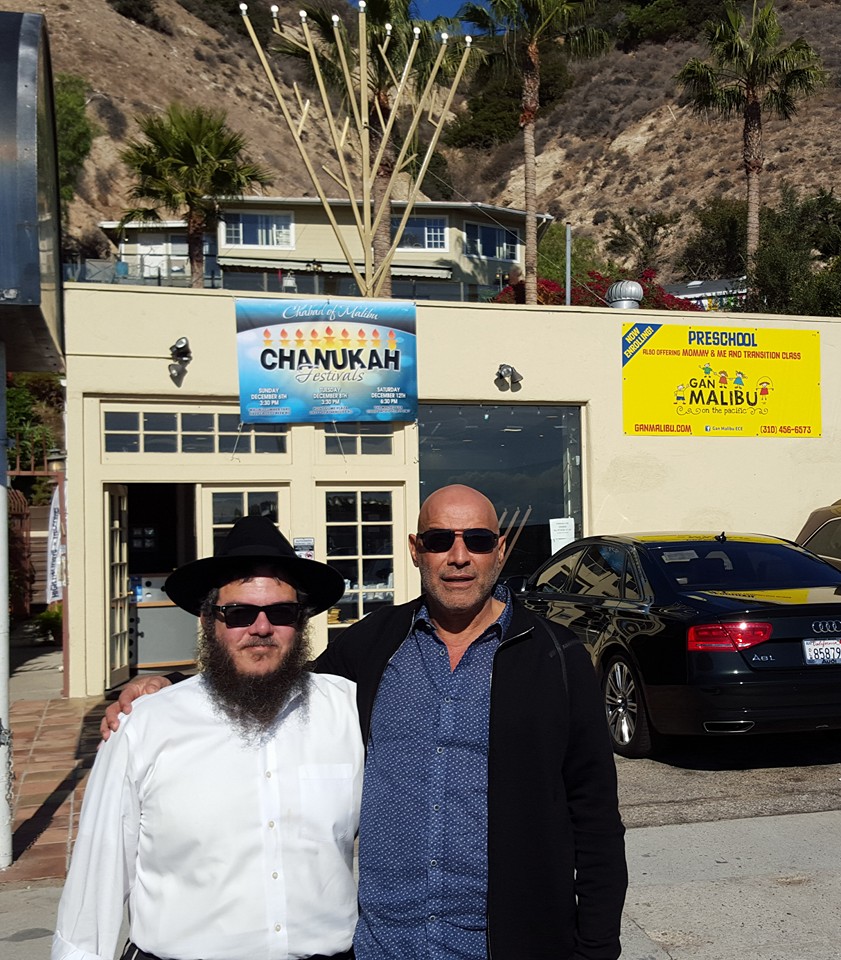 Shlichus on a Different Frequency

I was a young man when the Lubavitch world was rocked by the Rebbe’s passing on Gimmel Tammuz, 1994. I was in California after returning from Russia, where I spent a half year helping my father in Moscow. It was a very emotional time, and we were all confused about what came next.

My father had been the head shliach of California since 1965, and was zoche to have many interactions and personal correspondence with the Rebbe. In an emotional moment on the Friday after Gimmel Tammuz, my father handed me several bills he’d received from the Rebbe, saying, “The Rebbe told me that if I ever encounter a predicament where there seems to be no answer… I should open a Chabad House.”

With that, we got in the car. Somehow, without any particular destination in mind, we ended up in Malibu, 45 minutes away. There was a "FOR SALE" sign on a building in the center of the city. My father recognized the owner’s name, and, after a quick call, we received permission to use the space for the following Shabbos - and that’s how Chabad of Malibu began.

I was just starting out when I received a call from Anya, asking me to kasher their kitchen.

Anya and her husband, Boris, arrived in America at 20 years old, with absolutely nothing in their pockets. Boris worked hard, went to school, and, 17 years later, was a successful entrepreneur and tech mogul.

I met them after he was well-established, and every week, we learned Chassidus together and farbrenged about the Rebbe. Even though we could’ve really used the help, I hadn’t yet brought up finances or made any donation requests to them. Anya called me one day to ask about it: “Why,” she began, “don't you ever mention your financial needs? Why haven’t you asked Boris for anything? We’ve met many other rabbis, and they always ask for money after just a couple meetings!”

At our next learning session, I brought up the conversation I had with Anya. I confessed I was working with my father, and we needed $100K to cover teachers’ salaries for the Beis Chaya Mushka girls’ school in Los Angeles.

“Is over four quarters okay?” Boris asked. I nodded. “Great. Shoot me an email in the morning to remind me,” he said, and continued learning as if nothing had happened. It was clearly a heavenly inspired gift in the most humble and unusual way!

As we met over the next few months, it was clear to me, with his many deep questions, that what he needed was more than I could offer, so I connected him with Rabbi Manis Friedman. We set up a weekly chavrusa, where Rabbi Friedman would weave the stories from Chumash seamlessly with the Chassidic inner dimensions, so filled with anecdotes and insights that, after a couple of weeks, his desire for a deeper understanding grew exponentially. Some of his past Jewish experiences kept his interest at bay, but not anymore.

These sessions with Rabbi Friedman inspired him to take action. The fruits of those actions continue to bring the “wellsprings” of the Rebbe’s teachings, in many languages, to the whole world.

On many other occasions, my father would approach him, asking for donations for various worthy causes. One time, my father called to let me know how dire our situation was. He asked if Boris would like to assist. I suggested he speak directly with Boris.

“If I agree now, will you promise not to ask me for more money for at least a year?” Boris asked.

“Absolutely not!” my father answered. “How could I deprive you of the brachos you’d receive from giving tzedakah?” Boris went on to give much more tzedakah that year.

I was still a single bochur during that first year, and was working for my father in Chabad of California’s headquarters. I’d go to Malibu every Shabbos and make a minyan, complete with a cholent kiddush. I also had a shiur there once a week, and I slowly built up my Malibu contact list, week by week.

I got married just before the first anniversary of Chabad of Malibu, and we moved straight to Malibu on shlichus - within our sheva brachos week.

One motzei Shabbos, I was cleaning the cholent pot and clearing the room I rented for Shabbos. I saw a man staring at me, so of course, I offered him a cookie.

With the ice broken, we quickly got to talking. He introduced himself as “Hirsh,” and told me he hadn’t been to shul in years! His wife wasn’t Jewish, but he wanted to connect more to his Judaism.

I invited him to join us the next week, which he did. Hirsh became one of our core members. He attended Chabad of Malibu for the rest of his life, and even hosted a weekly shiur in his house.

After a few years, the building we were using as a Chabad House simply wasn’t big enough anymore. We desperately needed a larger place.

Since Gimmel Tammuz, my father travels once a month to be by the Rebbe for Shabbos Mevorchim. One such weekend, my father called me and told me that he was just at the Ohel and that I should clear my schedule for the following day “We’re going to find you a new Chabad House!” he declared.

So, the next day, my father and I drove around Malibu, looking for an appropriate location. My brother Tzemach Yehoshua z"l, guided us from the office. Whenever we saw a promising house or building, he’d find the owner’s information online and give us their contact information. Most of them hung up on us right away.

As we were completing our day, starting to drive back home, with no real prospects, we passed by an office building, and my father craned his neck to get a better look.

“What about this one?” he suggested.

A woman was sitting behind the desk. She was extremely helpful. She told us the owner, Ron, didn’t live or work on-site, but she gave us his number and wished us luck.

“Hi, this is Rabbi Cunin. I’m calling about your building on East Pacific Coast Highway. We’re interested in purchasing it and-”

“How did you know?” came the dumbfounded answer through the phone’s speaker. “I just signed the papers to put it up for sale half an hour ago! How did you find out so fast?”

The next morning, we had a meeting. Ron and several of his associates were Jewish. They all put on tefillin, some for the first time.

Although I had no money in the bank, we agreed to go in escrow for $50K, and to come up with the sum’s remainder in another sixty days.

“Do you have your checkbook, Levi?” my father asked. I nodded and took out my checkbook, shakily writing a check for $50,000 I didn’t have. “Mazal tov!” my father called out joyously.

As we got in the car, my father wished me mazal tov again and said, “Make sure that check doesn’t bounce tomorrow.”

It was a curious mixture of excitement and fear. If we could pull this off, what a bracha it would be! But how?

Over the next weeks, I made many calls and had many meetings. Forty days passed. Miraculously, with the help of some special Yiddin in Malibu, we were able to raise half a million dollars, and every penny had cost a lot of effort. How would I get another $1.1M in just twenty days? The current renters of Ron’s property came to my office to discuss the orders of vacancy they’d received. I called my father in a panic.

“What should I do? I don't know how I could raise another million dollars in three weeks! What should I tell these people? I don’t know if we’ll actually be moving in, so maybe they don’t have to leave!”

“What are you talking about, Levi?” my father answered, predictably. “Of course you’re moving in!”

I took a deep breath and reminded myself of the Chassidic teaching, “moach shalit al halev.” “The mind rules the heart.” It is possible to be in a frenzy of thought, but present yourself with confidence and calmness.

I went out to greet the tenants with a serene smile. Although my heart beat wildly in my chest, I assured them we’d be moving in as soon as possible.

My father helped us renegotiate so that we had more time to pay the full amount. With the help of Hashem and the rebbe's bracha we saw continued miracles. In the end we were able to secure the purchase.

“You look just like the rabbi in Malibu,” she commented.

Betty pointed to her son next to her. “It’s because of him that this boy is alive.”

Our Chabad House is on a busy road in Malibu, and curious passersby often stop in. Betty felt drawn to stop in and say a special prayer as she was on her way to have an abortion. I’d never met her before. She wanted to know what prayers would be appropriate to say as she went through the procedure. Hashem put the right words in my mouth. I have no remembrance of the encounter or what I said, but Betty left the Chabad House with a complete change of heart, determined to keep her unborn child.

Today he’s the joy of the mishpacha and will shortly be celebrating his bar mitzvah.

Mike and Allie were having marital issues. After the birth of their son, Mike had started becoming more religious. Allie wasn’t ready. They were contemplating divorce.

They came to me for advice, and I showed them a letter of the Rebbe. The Rebbe writes that the one who’s becoming religious is the one shaking things up. They can’t impose their choices on their spouse.

When I met them again, Allie shared that she was expecting again and said, “This is all because you read us that letter. Since then, everything has changed.”

Mike opened his wallet and told me, “I’ve had this wallet for seven years. Everything in it has changed at one point. Except this.” Saying so, he pulled out a picture of the Rebbe.

Brennan was a famous movie director. His non-Jewish girlfriend dragged him to our Chanukah party, but my experience with him told me he was uninterested in anything religious.

I had recently learned the Alter Rebbe’s maamer about tefillin, and I wanted to make my learning practical.

I approached Brennan and asked, “Clearly, you’re a very creative guy. How do you come up with new ideas?”

“Anyone with that answer would be a billionaire!” Brennan joked.

“What if I told you I had the formula - if you were open to it?”

“Creativity means opening yourself up to new ideas; surrendering your preconceived notions and accepting that something beyond your understanding exists out there.”

“So, are you ready to surrender?” I asked him. Brennan nodded, still a little confused. I rolled up his left sleeve and began to wrap tefillin around his arm. It was the first time in his seventy years that he’d put on tefillin. He repeated the bracha after me, word by word. Then we said Shema together. Brennan broke down in tears.

“But how could He let six million die?” he cried out.

It was like his neshama had finally connected with Hashem, and at long last, was able to pour itself out before its Father. Even his grief was beautiful; that honesty was a crucial step in his journey to Yiddishkeit.