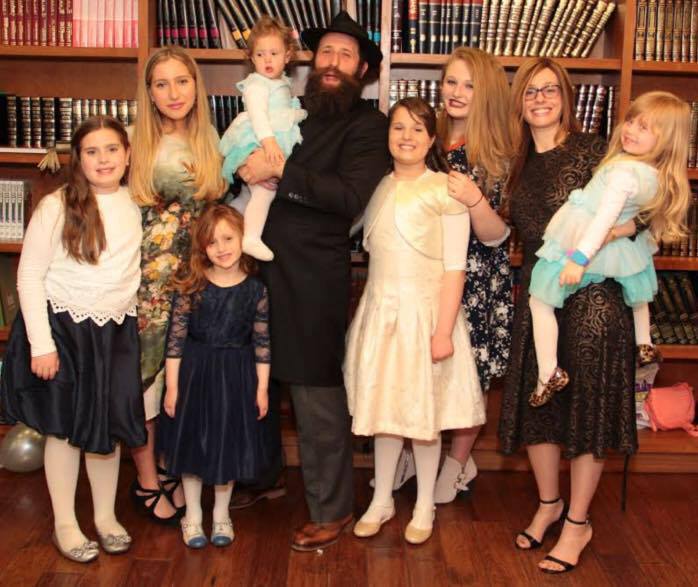 Bring Joy to Yidden - Every Day!

Our path to shlichus was one-of-a-kind. We didn’t grow up in shlichus-minded homes, and we had no connections. All we knew of Yiddishkeit were our own experiences becoming frum through the Chabad rabbis in our respective hometowns.

At that stage in my life, I was lucky to receive clear answers every time I opened the Igros Kodesh. So when I was faced with a new dilemma, I didn’t hesitate to write another letter, asking for guidance.

My father and I had made a deal. I’d be permitted to marry my now-wife at 19, but only if I graduated from an advanced program from YU. After we got married, I spent a year in kollel, and then I wrote a letter, asking for a bracha to resume my college education. I opened letter after letter, but there was never any reference to college, education, yeshiva, or anything that seemed to address my concern.

When I spoke about it with rabbis and mashpiim, they quoted the Rebbe’s advice that those who have started a college degree should complete it. I listened, but it didn’t feel right. So, I met with my personal mashpia, who noticed I seemed down. After hearing me out, he asked to see the original letter I’d written. He glanced over it and looked at me sharply.

“You always get clear answers. If you aren’t now, it means you didn’t ask it in the right way. Look - you’re presenting college as a fait accompli. You gave the Rebbe a done deal! Approach it with an open mind and heart. Tell the Rebbe the facts, and ask what to do. As a chassid, as a servant of Hashem, what’s the right path to choose? And make sure to ask your wife first!”

After calling my wife on the yeshiva’s payphone, I sat down to compose a new letter. Ani nivraisi lisamesh es koni. I was created to serve my Master. My father wants me to go back to college. What does Hashem want me to do?

I opened a volume of Igros Kodesh and excitedly read the letter’s first words: Now you are starting something new. Don’t be involved in financial arrangements and worries. Just make Jews happy.

For me, that was a clear sign to go on shlichus. I was a year into a psychology program at YU, with another six years to go. We were excited to help people, but we wanted to do it sooner.

I went to daven Maariv and bumped into a friend.

“Oh, hey! Are you interested in joining us on shlichus?”

This friend of ours was researching shlichus positions and had found a promising lead in Greenwich Village. The head shliach was looking for more couples to start a Chabad house in the area. With clear hashgacha pratis, everything fell right into place.

When we first started, we were so lost. It felt like an uphill battle. Every single student we met was a momentous victory. Our first Neilah had exactly one, lone attendee.

Over the last 24 years, our Chabad house, in the heart of New York City, has grown tremendously. We now have a crowd 300 strong for Neilah. On a typical Shabbos, we have meals in three locations, with 800-1,000 students, undergraduates, alumni, and young professionals.

We believe people want passion. We don’t shy away from talking about Yiddishkeit, Hashem, or the Rebbe. I’ll often ask a student, “What’s your relationship with G-d like?” When it comes to gashmiyus, we’re progressive, and we’re intensely passionate about ruchniyus.

In the early years, when I was still searching for Jews door-to-door, I walked into an antique store and asked the owner if he was Jewish. I was unprepared for the verbal barrage that followed.

“Get out of my store! You think I want anything to do with an Orthodox Jew? A chassid? Get out now!”

Lubavitchers have a name for being pushy. I fully lived up to that reputation and came back the next day. He didn’t even wait for me to open my mouth before he began screaming again.

“Wait a second!” I interjected. “How can you judge me just based on what I’m wearing? You don’t even know me! At least let me introduce myself!”

A year later, Sarah was giving his daughter bas mitzvah lessons, and we put on tefillin a couple of times a week. He even gave me an office space in his store.

We found out he’d grown up religious. He’d had a very bad experience that embittered him towards anything religious - and yet, with the power of authentic Yiddishkeit, determination, and real human connection, we went from screaming to smiles in just one short year!

Benny and Cherise were siblings who came for Shabbos a few times. Benny loved every minute and was becoming more religious, but Cherise was defiantly resistant to inspiration.

Some Friday nights, after the meal, we have impromptu farbrengens that usually get pretty intense. People open up and share their deepest thoughts and feelings. These farbrengens were the key that finally unlocked Cherise’s heart.

Although she attended Columbia, a prestigious Ivy League school, she transferred to NYU, so she could stay close to our Chabad house.

I often emphasized that our mission was simcha. After all, that was the opening mission statement of the Rebbe’s letter that had sent us here to begin with. I also jokingly bemoaned that our address was just plain 353. No special significance, like 613, or 1836.

One day, Cherise ran into my office, visibly excited.

“Rabbi, I just figured it out! 353 is the gematriyah of simcha!”

Cherise eventually met her husband in our Chabad house. They’ve since made aliyah and are raising a family in the Holy Land.

Washington Square Park is known as a place to encounter various temptations. It’s also where we built our sukkah and hosted Yom Tov meals.

One Sukkos night, after the meal had ended, we were farbrenging around the table, singing soul-stirring niggunim, arm-in-arm. Just then, a man appeared in the doorway of our sukkah, looking utterly dumbfounded. I could tell at a glance that he was frum, although his yarmulkah, hat, jacket, and tzitzis were conspicuously missing. I doubted he’d walked from his home, and I refused to even consider what he’d been looking for in the park’s infamous square. With a big smile, I gestured for him to join us while we continued singing. He sat and broke down in tears.

“Hashem found me, even here,” he repeated over and over. He stayed to farbreng long into the early hours of dawn. At his darkest moment, he’d been given the opportunity to be reborn.

I hadn’t seen or spoken to Jeff since I’d bar mitzvahed him seven years before. When he entered my office, he was lost and looking for a connection. I asked him if he’d like to put on tefillin, and he agreed. It was exactly the spark his soul was searching for. He wanted to continue putting on tefillin, but he didn’t know where his bar mitzvah pair had gone. I bought him a new pair, and Jeff now lays tefillin regularly.

There’s no better ROI than the few minutes it takes to put on tefillin.

As I greeted students entering the hall for the first seder, I noticed an unfamiliar face.

“Benjamin Abrams,” he introduced himself. We shook hands, and I continued greeting our other guests. He’d only signed up for the first seder, but he showed up the next night as well, and chose a seat at the front. I didn’t know who he was, but when he came to shul that Shabbos, and the next, and the next, and the next, I finally sat down with him for a real heart-to-heart.

“I’m a PhD student in chemical physics,” he told me. “I grew up in a traditional home, and I wanted to become shomer Shabbos - but when I pictured the yarmulkah, and the kosher food, and the tefillin, and everything that would come with it, it was all so overwhelming. I couldn’t take on that much at once.

“Then I came to your seder. You repeated a teaching from the Lubavitcher Rebbe which states that every mitzvah has individual value. Regardless of one’s actions the moment before or after, in the moment they’re fulfilling the mitzvah, they’re connecting to G-d. It made me realize I didn’t have to change everything all at once.

“I started keeping Shabbos for a half an hour, and each week, I’ve kept Shabbos for longer and longer. This week is the first full Shabbos I’ve observed!”

Professor Binyanim Abrams is now a widely recognized figure at Boston University. He’s renowned for his lectures on Torah and science. He’s fully frum - and his beard is longer than mine!

Shira had attended many shiurim and was interested in learning more. Her commitment solidified the first time she came to our home. When she met my daughter Chana, it inspired her to start wearing tzniyus clothing. She stopped wearing pants that very same day!

The driving force of our shlichus is simcha, and we try to incorporate it into every part of our lives.

I desperately needed $5,000 by the end of the day, and I’d been calling donors for hours - but nothing was panning out.

“What should I do?” I asked my wife in despair.

“Put down the phone and start dancing!” she suggested. “Simcha is the key that invites brachos to rain down!”

I took her suggestion and began dancing around the kitchen. I was interrupted by a phone call.

When someone in my Chabad house is going through hardship, I often go to the Ohel and ask Hashem to show them their path. Daniel was going through a really rough time. He felt lost in life. I said Tehillim on his behalf, and asked for a bracha for him.

As I left the Ohel, a thought struck me with intense clarity. Daniel should move to Eretz Yisroel! It wasn’t a suggestion I made frequently, but somehow I knew this was his answer. When I returned, I mentioned the idea. Daniel was intrigued, and made the move a few months later. It’s been incredibly successful for him. He’s found his place and is truly thriving.

“Do you remember me, Rabbi?” In front of me was a frum Jew, his white shirt neatly tucked into his black suit.

“Not really,” I admitted.

“You stopped by us in the park to ask, Are you Jewish? That one question changed everything. It opened up my eyes. Now, my whole family and I are frum. My brother became frum as well, and my mother is becoming more religious, too. We’re all so glad you didn’t pass us by.”

That’s the goal of shlichus: to restore Jews’ access to their own precious inheritance.

This journey has just been incredible. Who’d have thought that we, who grew up deeply secular, so far from Yiddishkeit, would go on to lead one of the largest Chabad houses in the world? Our oldest daughter was born on Pesach Sheini - a clear message that it’s never too late to turn onto the right path.