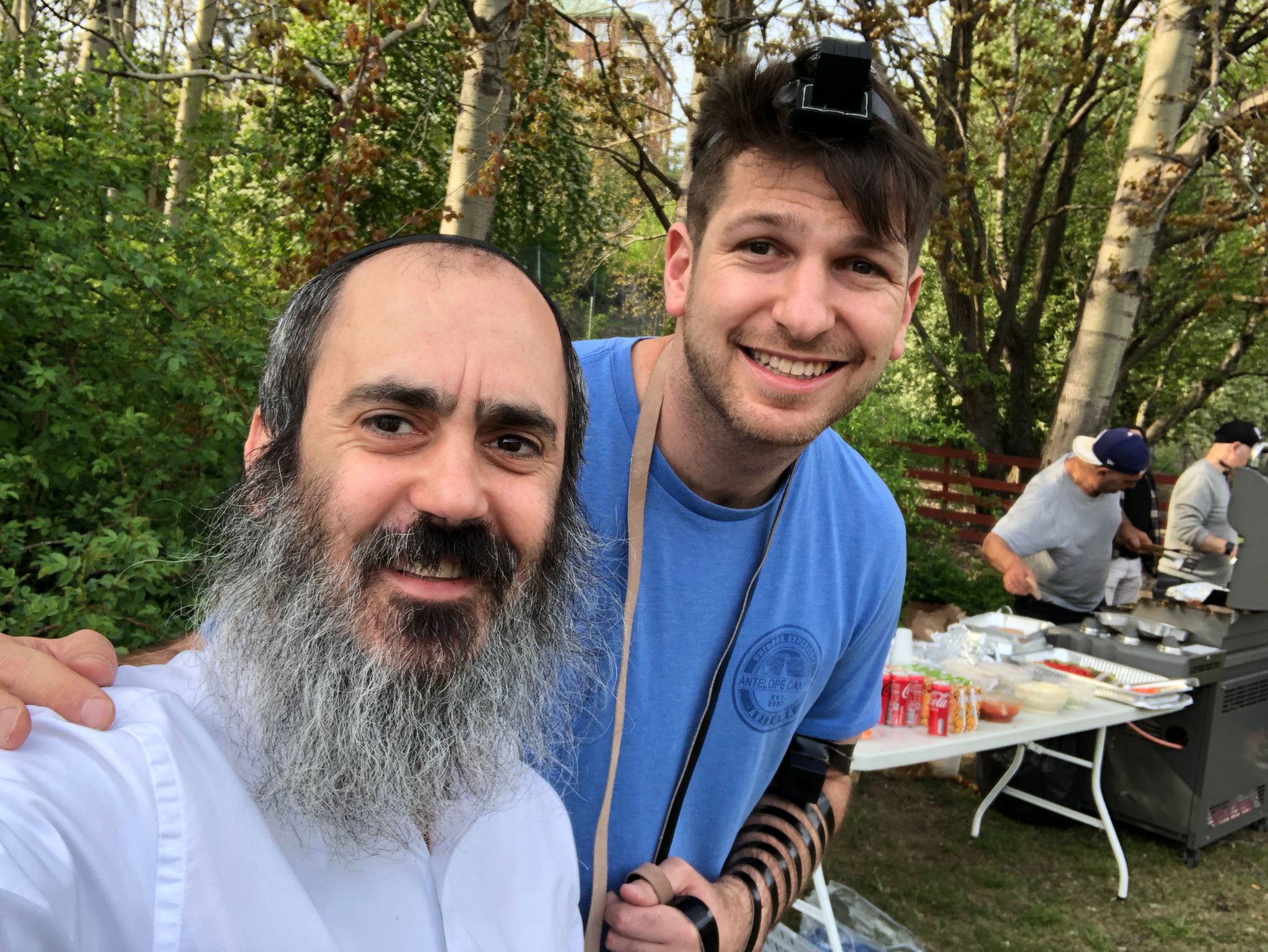 You Never Know When Or Where You’ll Meet Another Jew

We made the “mistake” of first visiting Stockholm on a beautiful summer day. The weather was glorious, the scenery picturesque, and the people, friendly and cheerful. We were taken with stunning Stockholm and quickly made the decision to make it our new home.

We started our shlichus a few months later in a city that was almost unrecognizable. The cold winter weather mangled the landscape, throwing a dark, gloomy cast over the city, and sent everyone scurrying for the cozy hibernation of their homes.

It would take a lot more than cold weather to dampen our excitement and passion, however. Stockholm’s Jewish community was large and rather active, although there were very few frum families. They were ably equipped with a rabbi, shul, school, mikvah, small kosher store, and even a cafe!

In fact, when we spoke with the president of the community, she was less than enthused. “I feel bad,” she told us. “You’re going to be so bored. There’s nothing for you to do here, since our community already has everything it needs. Feel free to come, but don’t expect a red carpet.”

We worked with the infrastructure that was already in place, and focused our energies on Shabbos dinners, shiurim, Hebrew school, and holiday programs, which we felt the community needed. We sometimes host minyanim as well.

Baruch Hashem, we were and are far from bored! Over the last 22 years, our activities have become part and parcel of Jewish life in Stockholm, and there’s great partnership and cooperation between Chabad and other Jewish organizations.

As frum Jews, Sweden’s national ban on shechitah and regulation for brissim are somewhat challenging, but we’ve managed to work with the laws, in conjunction with guidance from rabbanim.

During the summer, we have weekly shalosh seudos and havdala events. Since Shabbos doesn’t end until 11 or 12 o’clock at night, it can be difficult to get a minyan.

One week, there were nine of us ready to daven mincha. A tenth person had promised to come, but he was nowhere in sight and it was just getting later and later. At that time of night, there weren’t too many passersby on the road - especially not Jewish ones - that we could stop and ask to complete our minyan. Still, we opened the windows and looked up and down the street.

We were distracted by someone waving from the window, right across the road from us.

“Hey!” he called out, seeing our yarmulkas. “I’m Jewish too!”

He was very friendly and shared his story:

I always knew my father was Jewish, but it didn’t really mean much to me. My parents divorced when I was very young.

My mother was born right before World War II. She was harassed for her Jewishness as a young girl in Germany, and after surviving the war and moving to Sweden, she decided she was done with it all. About ten years ago, she posted a message about her own mother’s passing, referencing her Jewish identity.

I was very curious about my Jewish heritage, so when I saw your kippas, I knew I had to come introduce myself!

He came by the next week to put on tefillin for the first time in his life. He also joined us for Friday night tefillos and a Shabbos meal, where he enjoyed himself immensely.

I got a call from the Jewish association director in Umeå, a small city in northern Sweden, about an hour’s flight from Stockholm. She asked me to arrange a Chanukah party for their small community.

Umeå is close to the Arctic Circle. In the winter, daylight breaks around 10:00 AM and they enjoy the sunlight for a few hours. I landed just over an hour before shkiah. When I finally arrived at the venue, it was only a few minutes before sunset. Before starting with the Chanukah event, I quickly asked if anyone had not yet put on tefillin, eager to use those last minutes of daylight to help a Yid do a mitzvah.

One man raised his hand. “I haven’t,” he said, “but I’ve never put on tefillin in my life, so you’ll need to help me.”

When Amichai* shared how he came to be at a Chanukah party in Umeå, of all places, I was amazed by the incredible hashgacha pratis that affected his multi-generational story:

After World War II, Sweden accepted a lot of immigrants, scattering them throughout the country. That’s how a young Jewish woman from Lodz found herself in Umeå. There were no other Jews around, so she ended up marrying a Swede. Together, they had two children, Klaus* and Anna*. Anna also married a Swede, and raised the third generation of Jews in Umeå. Anna’s daughter, Nina*, decided to spend a year on a kibbutz in Israel. There, she met my son, Omar*. They got married and moved back here to Umeå. I’m here to visit my beautiful new grandson, who was just born. I myself grew up in a kibbutz in northern Israel. In all my 60+ years, I have never put on tefillin.

Listening to his story, I was struck by the hashgacha pratis of an Israeli man who had to travel to a small, desolate town near the Arctic Circle to put on tefillin for the first time in his life, two minutes before shkiah on a Chanukah afternoon.

Franny* was a sweet, elderly woman who attended almost every shiur. I never heard her mention her husband, so I assumed he’d passed, or that they’d divorced and were no longer in contact. She called me up one morning with a surprising request.

“Rabbi, my ex-husband is in hospice. He asked to speak to a rabbi. Could you visit him?”

I immediately drove over to visit this man, whose existence I’d only just learned of, minutes before. The atmosphere in his room was heavy, as his family gathered around his bedside to say their goodbyes. I greeted Franny, her two daughters, and her grandson, a young man, about eighteen or so.

I spoke to the patient for a while and chatted with the family. “By the way,” I said to the teenager, “did you ever have a bar mitzvah?”

“Not really,” he answered. “I started to take lessons, but it was too hard, so I just stopped. I never actually had a bar mitzvah.”

“Would you like one now?” I asked with a twinkle in my eye.

He agreed, and I wrapped the tefillin straps around his arm and guided him in the recitation of Shema. I then turned to his grandfather and asked him if he would like to don tefillin as well.

“Why not?” he said, rolling back his hospital gown sleeve.

As I removed the tefillin from his arms and replaced them in my bag, he looked me straight in the eye and said in a voice laden with emotion, “I put on tefillin twice in my life: by my bar mitzvah, and on my deathbed.”

He passed away two days later.

I am still overwhelmed by the magnitude of that moment: grandfather and grandson donning tefillin together; one for the first time, the other for the last.

Mr. Ferenc G?nd?r was a Holocaust survivor. He authored a book in Swedish describing his incarceration in Auschwitz and frequently traveled to schools to share his personal recollections.

Towards the end of his life, he tired easily and it was difficult for him to leave home. He called me one morning and asked for my assistance. The knots of his tefillin were too loose for his shrinking body and he needed them to be adjusted.

After I resized them properly, he asked me to help him put them on.

I agreed, marveling at the heiligkeit of a Yiddishe neshama who concerned himself with tefillin in the last few months of his life. “This is Jewish revenge,” I reflected as I gently covered the blue tattooed numbers on his arm with the strap of black leather.

On Chol Hamoed Sukkos, we took our children on a special family outing. We walked through the beautiful forest outside of Stockholm.

“Let’s take the lulav and esrog with us,” I suggested. “You never know when you might meet another Jew.”

We had a wonderful walk, enjoying nature’s calm waters and late afternoon sun. Suddenly, we heard a child calling, “Shalom!” We turned around and saw two Jewish families, hiking just behind us.

“What are you doing here, of all places?” they asked in amazement.

“I’m waiting for you, with a lulav and esrog so you can fulfill a mitzvah,” I answered.

And so, minutes before sunset, surrounded by the wonderful world Hashem created, another group of Jews had a chance to connect to Hashem and their rich Jewish heritage.

I was on my way to a kosher inspection in Värmland, looking forward to a relaxing journey where I’d have a few hours to prepare for my upcoming classes. Shortly after the train left Stockholm, I heard Hebrew behind me. Curious, I turned around and found two Israeli businessmen sitting and eating Israeli pitzuchim. Naturally, I sat down next to them and we engaged in a friendly conversation, noshing on the pitzuchim and chocolates. We even discovered some friends we had in common.

I always carry a pair of tefillin in my bag, everywhere I go. You never know when or where you will meet another Jew. I offered them a chance to put them on, and at first, they hesitated - but not for long. Within a few minutes, somewhere between Stockholm and Värmland, Doron* and Pavel* were proudly standing with tefillin, reciting the eternal words of “Shema Yisrael Hashem Elokeinu Hashem Echad.”