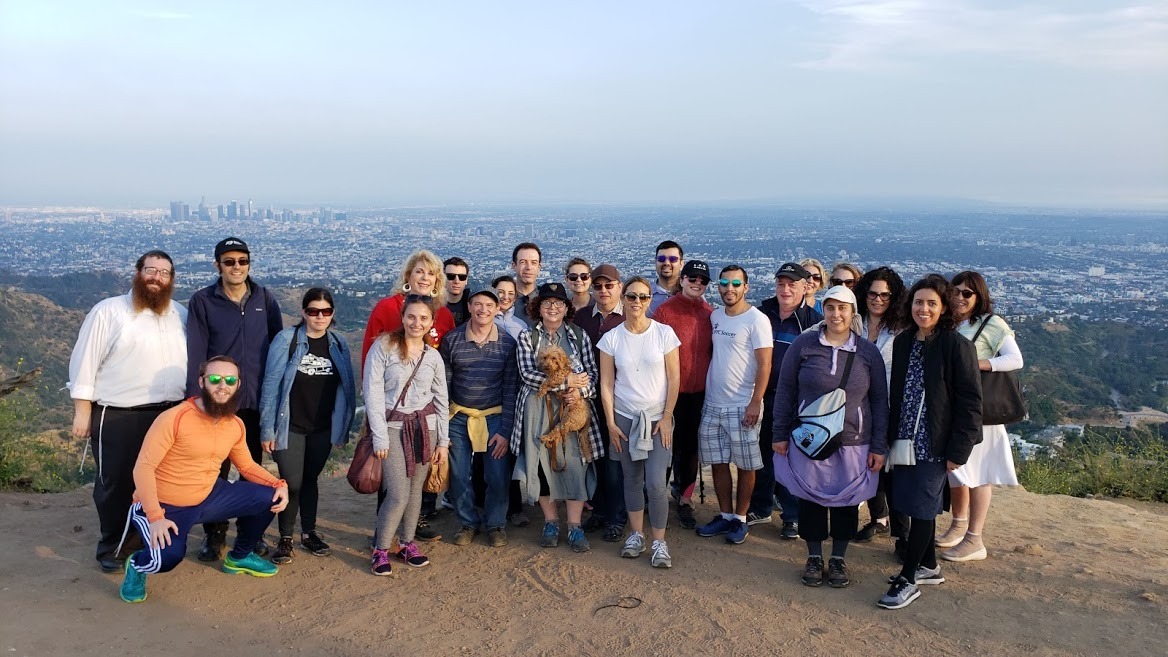 In 1970, the Rebbe sent my in-laws, Rabbi Naftoli and Fayge Estulin, to Los Angeles. Years before the Iron Curtain fell, well before anyone even dreamed of such a possibility, the Rebbe’s instructions guaranteed a supportive infrastructure for the first wave of Jewish Russian immigrants that flocked to California later that decade.

Twenty-four years ago, my wife and I moved to Mt. Olympus, in the beautiful Hollywood Hills, to serve the Jewish community and the large segment of the Russian Jewish population that had moved to the area, with a focus on young Jewish families and young professionals.

It was a hot Californian summer night. Something - a faintly smoky smell and flickering lights - woke us up. I cautiously went to investigate and was appalled to see huge flames roaring in front of our house. Fearing the worst, we scooped up the little kids and ran outside. We saw that our car had been set ablaze, and we watched in tearful helplessness as it went up in flames.

When the fire was put out, we were invited to view the remnants of our car. Everything had been completely torched - except for some sefarim. Our family was shaken up by this intensely personal, targeted, anti-Semitic attack.

While the police and FBI investigated the physical causes of the arson attack, we examined the spiritual ramifications. We initiated a campaign called “Fight Fire with Fire,” inviting Jewish women to ignite the flame of the Shabbos candles, combating that raging fire of anti-Semitism and evil. Hundreds of Jewish women pledged to light Shabbos candles that Friday night, many in-person at our Chabad house. The number of teens and young Jewish professionals that pledged to take on the mitzvah every week - and still do to this day - is touching and inspiring.

Evelyn was going through a really difficult time. She felt stuck. She visited us frequently and we worked to nurse her mentally, physically, and spiritually back to health with unconditional love.

On her own initiative, she kept her first Pesach. Then, she started keeping Shabbos. She was struggling to choose her future path: pursuing a lucrative career as a criminal defense lawyer, or developing her commitment to Yiddishkeit by attending a yeshiva in Israel.

She wrote a letter to the Rebbe, asking for advice. She opened the Igros to a letter that read, “Lech Lecha.” “Go out from yourself to your forefathers.” Evelyn enrolled in Mayanot in Yerushalayim a short while later.

One of her instructors began teaching Rashi’s explanation on the pasuk of “Lech Lecha.” Evelyn, now realizing the full significance of the Biblical command to Avraham and just how much it applied to her, burst into tears.

Now, twelve years later, Evelyn gives shiurim of her own, and her large, happy family is a pillar of the Chabad community.

In the early years of our shlichus, we arranged a kabbalah seminar with Rabbi Leibel Wolf. Amongst the registrants was a man named Boris. There were over a hundred participants at the seminar, but when I saw a stranger there, I made a beeline for him.

“You must be Boris,” I said, acting on intuition.

He gasped. “How did you know?”

Our unusual introduction created a deep bond between us. Boris introduced me to his wife, Katya, whom he had married in Kiev, just before they emigrated to the United States.

Boris told me he’d even attended a Chabad yeshiva in Kiev before he was married. There were a couple of American bochurim who tried to inspire the students with the warmth and fire of Yiddishkeit and Chassidishkeit. For Boris, though, the timing was all wrong. He wasn’t in the right mindset to appreciate the yeshiva, and he left after a short while, leaving his frumkeit with it as well.

Boris and Katya visited many times over the next year and a half. The day after joining us for Rosh Hashana services and meals, I received a call with a horrifying question: “Rabbi, what comes first in Jewish law - the life of the mother, or the baby?” Boris asked with a tremor in his voice.

Katya was only seven months pregnant, but sudden complications had developed, landing her in the hospital. We immediately packed up food and went to visit them.

I asked a bochur who worked for us and knew them well to visit the Ohel on their behalf and ask the Rebbe for a bracha. The doctors were urging an abortion to save Katya’s life. We wrote to the Rebbe together and received an incredible answer from the Igros for a miracle. Baruch Hashem, their little preemie miracle baby was born a short while later. Sara Devorah is now twenty-one years old, and has grown into a wonderful, frum young lady.

Boris attended the annual, international Kinus Ha’Shluchim in Brooklyn, New York with me one year. We sat at a table with two rabbis - the ones who had been in Boris’ yeshiva in Kiev years before. It was a memorable reunion, celebrating Boris’ full-circle return to frumkeit, which he’d first experienced in the yeshiva in Kiev.

Many of our community members never had a bris, so we often officiate at adult brissim.

The bris of our son, Yossi, was the first family simcha we celebrated on shlichus. We’d just met Alex, and invited him to the bris.

“I want a bris - just like your son,” he insisted.

A week after the bris of our son, Yosef Hakohen, Alexander Hakohen entered the covenant of Avraham.

Yuri chose his own Jewish name for his bris - Yisroel Shneur Zalman.

“I want to be named for the Baal Shem Tov and Alter Rebbe,” he said.

Yisroel Shneur Zalman’s son, Phillip, was born the same week as Yossi. A few months before they turned thirteen, we had a huge group hanachas tefillin ceremony with ten boys, all born within the same two months. Phillip and Yossi had an aliyah in the Rebbe’s room together in honor of their bar mitzvahs.

The issue of brissim is widespread in the Russian community. Russians are very traditional, but they also have implicit trust in the medical profession. Many parents will agree to have a bris, but they want it done by a doctor, not a mohel. They don’t understand that it isn’t simply about having the procedure done. To combat this misinformation, we made a professionally produced documentary entitled “Bris vs. Circumcision,” about brissim, with interviews from mohalim, obstetricians, and families who gave their sons brissim. The documentary has been very successful, baruch Hashem, and countless families told us it convinced them to opt for a bris over a surgical circumcision. We plan to produce more informative films about burial vs. cremation, kiddushin vs. marriage, and more.

Andre and Rachel are a young couple with a large social circle. They asked us to perform a chuppah for them in our Chabad house, attended by one hundred of their closest friends and family. A few days later was their wedding reception and ceremony, catered in a fancy hotel, with over 400 invited guests.

Rachel told us she considered their intimate chuppah at Chabad their “real” wedding. She committed to keeping taharas hamishpacha, and said she “felt the brachos” when she immersed in the mikvah. She bought Andre a talis and tefillin; he bought her candlesticks.

Through their example, three other couples were influenced to have a proper chuppah as well.

“Is this Chabad? Can I come by?” asked the voice on the phone.

“Sure, come for Friday night dinner,” I invited him.

When I met Seth, I could tell something was odd about him. I couldn’t exactly put my finger on it, but he was very unusual and had an interesting worldview. He was strangely ignorant about basics - he’d never seen a basketball before. He came often after that, and my questions only grew. He said he was from New York, but couldn’t answer any questions about where he’d lived. He said he lived in Los Angeles, but was similarly clueless. He claimed to be Jewish, but didn’t even know what a dreidel was. He was very evasive about his past, tensed up whenever he was asked about his father, and asked lots of questions about Judaism and Christianity. He was very intense, and many of our other community members felt uncomfortable around him.

There were just too many things that didn’t add up.

“You have to tell me more about yourself and your family,” I told him.

“If I tell you, you’ll never want to speak to me again,” he responded.

“I’m sorry, but that’s a risk you’ll have to take. I can’t vouch for you and accept you as part of our community without understanding.”

Seth took a deep breath and told me his father’s name. I Googled him and read the results with horrified fascination. Seth’s father was one of America’s most wanted fugitives. He’d founded an Evangelical Christian cult that was raided by the FBI. Seth grew up in this cult, raised by a father he equally idolized and feared. His father was a despot, who did not hesitate to resort to violence against his son. Seth claimed he was 22, but he was actually 17. He was on the lam, living in an apartment his father owned in Los Angeles. I spoke to his mother, who confirmed that she was Jewish, although she followed her husband’s version of Christianity fanatically. Seth was confused about his beliefs and I wasn’t sure it was halachically permissible to call him up to the Torah, given his convictions.

Everything made sense now. Seth’s vagueness, his lack of knowledge, and his social behavior.

I knew I had a difficult conversation coming up.

“Seth,” I told him, the next day. “Hashem clearly brought you here for a reason. Unfortunately, I can’t take responsibility for you. It’s illegal for you to be here. I’m very sorry. I’m sure we’ll meet again in the future.”

Seth was very upset. “I feel a special connection with you!” he protested. I apologized again, and gave him some sefarim from which to study. It was an emotional and painful conversation, but Seth accepted my decision and didn’t return to our Chabad House.

A few years later, he called.

“I want to apologize,” he said. “I know I put you in an impossible situation. I just wanted to tell you that I’m in Israel now, and have changed my life completely. I’m studying in yeshiva and have started keeping mitzvos.”

I was pleased to hear about his progress, and the next year, when I brought a group to Israel, I invited him to join our Shabbos meal. It was a cathartic and soulful reunion. We spoke about his childhood, and about his journey to Yiddishkeit.

When Shabbos ended, he told me he was going to visit his cousins, a frum family that lived nearby.

“What’s their name?” I asked in idle curiosity.

It seems Seth was right - we did have a special connection. Hashem sent him on this circuitous journey, connecting him to his heritage and his family.

We live in Hollywood, where it’s all about the external, the glitz and glam of materialism. Our job as the Rebbe’s shluchim is to reach the internal, the pintele Yid that shines forth under it all.