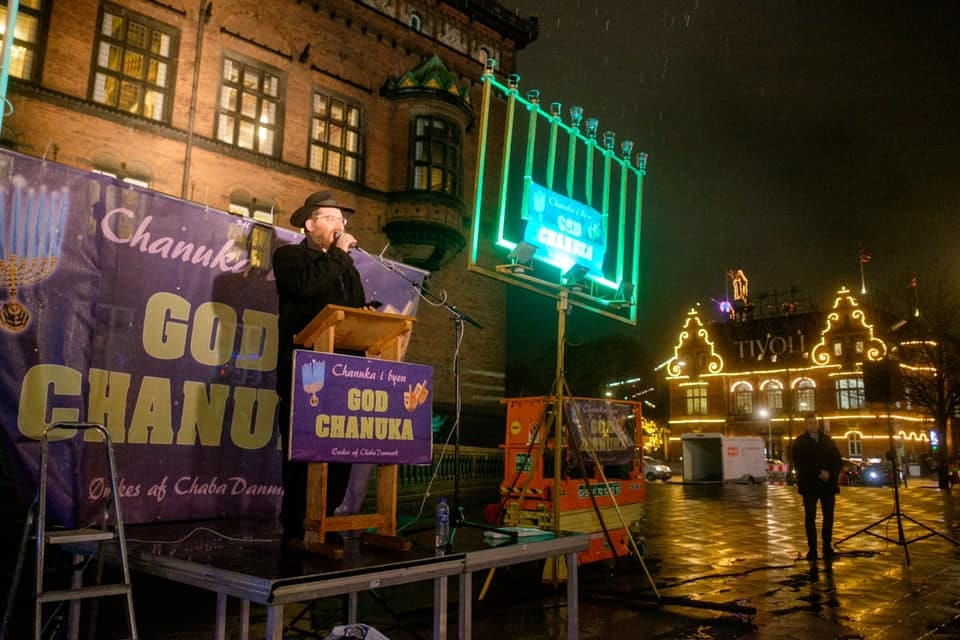 Why Is the Rebbe on My TV?

While some stories remain unverified, the claim that Denmark and its people went to great lengths to protect their Jewish population during WWII is an immovable, inarguable fact.

The Jewish community in Denmark is an old and respected one. Two prominent shluchim, Rabbi Chaikin and Rabbi Osdoba, were sent here as far back as the 60s. They received much guidance and personal instructions from the Rebbe.

The Grays, a Chabad family living in Copenhagen in the 90s, wanted to ensure the continuity of a vibrant Danish Jewish community. Mrs. Gray insisted, “By the time we leave, there should be a Chabad shliach in the city.” They worked tirelessly towards that goal, ultimately approaching us with the idea. We were intrigued. My sister is on shlichus in Sweden, just a few hours away. With the help of Rabbi Moishe Kotlarsky, who has always been involved in our shlichus and its success, everything seemed to fall into place.

The Danish community is deeply assimilated. They don’t like to make a scene or stand out in any way. When we suggested a public menorah lighting, everyone told us it was a bad idea. My sister’s family in Gothenburg had encountered a very similar challenge. They received a beautiful bracha from the Rebbe for success, so we took heart, applying the bracha to our own situation as well.

We wisely kept the entire event quiet until a week before. The community was in an uproar after the news broke. Everyone called us and urged us to cancel. “Denmark is different!” they insisted. “This kind of event is doomed to failure!”

As they say: “All publicity is good publicity.” The controversy resulted in a turnout of four hundred people! Since then, our annual public menorah lighting and Chanukah party at town hall continue to draw crowds.

Despite not being Jewish, Ursula was extremely interested in Yiddishkeit and loved visiting our Chabad House. She was even considering conversion. She often translated Jewish stories into Danish for us. One particular story, popularized by Baruch Levine’s “Lecha Dodi,” describes how an Arabic youth discovered his Jewish heritage by hearing the niggun of Lecha Dodi, composed by his great grandfather, Rabbi Shlomo Alkabetz. Ursula loved this story.

“Wouldn’t that be mind-blowing?” she told us. “Could you imagine suddenly learning you’re Jewish?”

A few months later, Ursula’s mother passed away. She was sorting through her mother’s papers, when she noticed her mother’s maiden name was distinctly Jewish. After some digging, Ursula found records of her maternal grandmother, buried in the Jewish cemetery, surrounded by her fellow Jews.

“Is this Lubavitch?” asked the scratchy voice on the phone.

“Yes,” I answered, my mind wandering to the long list of things I still had to do before Sukkos began.

“The chief rabbi of England said that if you need to find a Jew, you’d best call Lubavitch,” the man continued.

I was sure my brother was pranking me, but Gadi, as he introduced himself, assured me of his earnestness.

“I’m looking for Jonathan Cowen,” he explained. “He abandoned his family years ago. I need to track him down to reconnect him with his son and give his wife a get. We heard he was in Denmark at some point?”

He described Jonathan to me. The description rang a bell, but it was impossible to be sure.

“I think I might’ve met him,” I answered hesitantly. “But even if I have, I have no way of getting in touch with him now.”

“No problem!” Gadi answered, assuredly. “The chief rabbi said I could count on Lubavitch!”

I was touched by the chief rabbi’s endorsement, but skeptical about my chances of success. I was writing to the Rebbe, so I included Gadi’s problem in my letter and asked the Rebbe for guidance.

I walked into shul the first day of Sukkos and was met by a vaguely familiar face. It was Jonathan Cowen! I’d never seen him in shul before. I mentally thanked the Rebbe for such a quick and clear answer.

“Gut yom tov!” I greeted him. “Please join us for the seuda in our sukkah!”

He accepted my invitation and I made sure to get his number. I obviously couldn’t write it down, so I asked our other guests to memorize a few digits apiece. After yom tov, I passed the information on to Gadi, and later, received a call from Jonathan’s son.

“Thank you for finding him! But,” he hesitated. “...Do you think I should actually call him? He really let our family down.”

“I can’t answer that,” I told him. “All I can say is that it’s incredible hashgacha pratis that I even got his number!”

The son contacted his father for the first time in ten years and began his family’s healing process.

Freja, a neighbor of ours, was a sweet, elderly woman. Her relative called to tell us she’d passed away. He informed us Freja would not be buried in the Jewish cemetery. Their family couldn’t afford the $10,000 fee.

“This is too important! I’m sure we could raise enough money!” we told him.

“No. We don’t want any publicity. We’ll just bury her in a standard plot.”

I continued to meet with him in shul every day, and we discussed the matter from every angle. He refused to ask the public for donations. I wrote to the Rebbe, and thirty minutes later, I got a call from another community member. She was planning a large event, but had somehow heard this story and changed her plans.

Freja’s levaya was organized a short while later, and she merited a Jewish burial k’halachah.

Like other Scandinavian countries, efforts have been made to outlaw milah in Denmark. It hasn’t happened outright, but there are many regulations that make a bris difficult to arrange.

I was in New York, walking into 770 Eastern Parkway with my talis bag over my shoulder, when I received a phone call. Clara had a baby boy! Mazal tov! She lived in another part of the country, quite a distance from Copenhagen.

“I can arrange a mohel, no problem,” I told her. “But the law states a doctor must also be present. I’ll see what I can do.”

Many doctors refused to attend a bris at all. The only one who agreed lived in Copenhagen, and he told me Clara lived too far for him to travel.

I walked into the Rebbe’s room in 770 for shacharis. A scant moment later, the name of a Jewish doctor flashed into my mind. She lived just an hour away from Clara, and agreed to attend.

“I’ll come during my lunch break,” she told me. “Can you send a car to pick me up? My husband can’t know! He’s so against milah that our own children haven’t been circumcised.”

The next hurdle was finding a location. I posted on Facebook, asking for suggestions. Shira, an Israeli woman who lived nearby, volunteered her home.

Baruch Hashem, the bris was carried out without a hitch, and Clara’s little boy was welcomed into the congregation of Avraham. Shira was so inspired, she gave her own son a bris a few months later.

Every summer, we organize an overnight camp. For many years, we invited a group of children from Sderot, a city in southern Israel constantly beleaguered by missiles. It was an honor to grant them a brief peaceful respite. I can still hear the heartbreaking question, “But where are the shelters? Where do we go when the sirens go off?”

This year, we had the privilege of hosting a group of Ukrainian children. We were humbled by their recent sufferings and touched by the many that wanted to relieve their hardship. One counselor posted that her campers were wistfully eying her shoes and clothes. The next morning, she discovered $1,000 had been raised overnight. She took the entire group to the mall and bought them each a new wardrobe.

We always ask the Rebbe for a bracha that camp should be successful. We’ve learned this bracha can be fulfilled in many ways - even in ways we never expected. For example, one year, we had a smaller than usual group of campers. Our “imported” counselors were bored, and spent their free time farbrenging with Sarah, a junior counselor from the community. Sarah’s family now lives in Israel and lead frum lives.

Asta and her husband had been trying to start a family for a while. When she confided in me, I taught her about becoming a keili, a “fitting vessel,” to accept brachos. We learned the halachos of taharas hamishpacha together. Asta listened in polite silence, but I could see her heart wasn’t in it.

They’d already spent a fortune on treatments. Asta’s husband was desperate and convinced her to visit a mikvah. Once she agreed to go, Asta went all in, and followed all the halachos we’d learned together.

Baruch Hashem, about a year later, they had a baby. Asta thanked her doctors and their treatments; her husband ascribed it to the mikvah.

When they were ready for another child, the same thing happened. Asta visited the mikvah a second time, and they had their second miracle baby.

Joanna is a single mother of three children. We were trying to convince her to send her children to camp, but her non-Jewish ex-husband firmly refused.

“Last time they went to that camp, they wouldn’t even take a step out of bed without washing their hands six times!” he fumed. “It’s ridiculous!”

A few days later, Joanna called me with wonder in her voice. “Rochel, you’ll never believe what just happened. I was watching TV and a Nestea commercial came on. Suddenly, my TV went dark, and I saw a rabbi on the screen. He was smiling at me. I called my neighbors and asked if they were seeing the rabbi too, but they had no idea what I was talking about. A few moments later, the regular program resumed and everything went back to normal.”

I invited her over and put on a video of the Rebbe. At one point, the Rebbe stared straight at the camera and smiled. Joanna sat up in disbelief.

“That’s the Lubavitcher Rebbe,” I told her. “I don’t know for sure, but maybe he’s telling you to send your kids to camp, after all.”

Needless to say, Joanna’s children all joined us that summer.

We’re privileged to see Hashem’s Hand in everything we do, and to carry out the Rebbe’s shlichus.