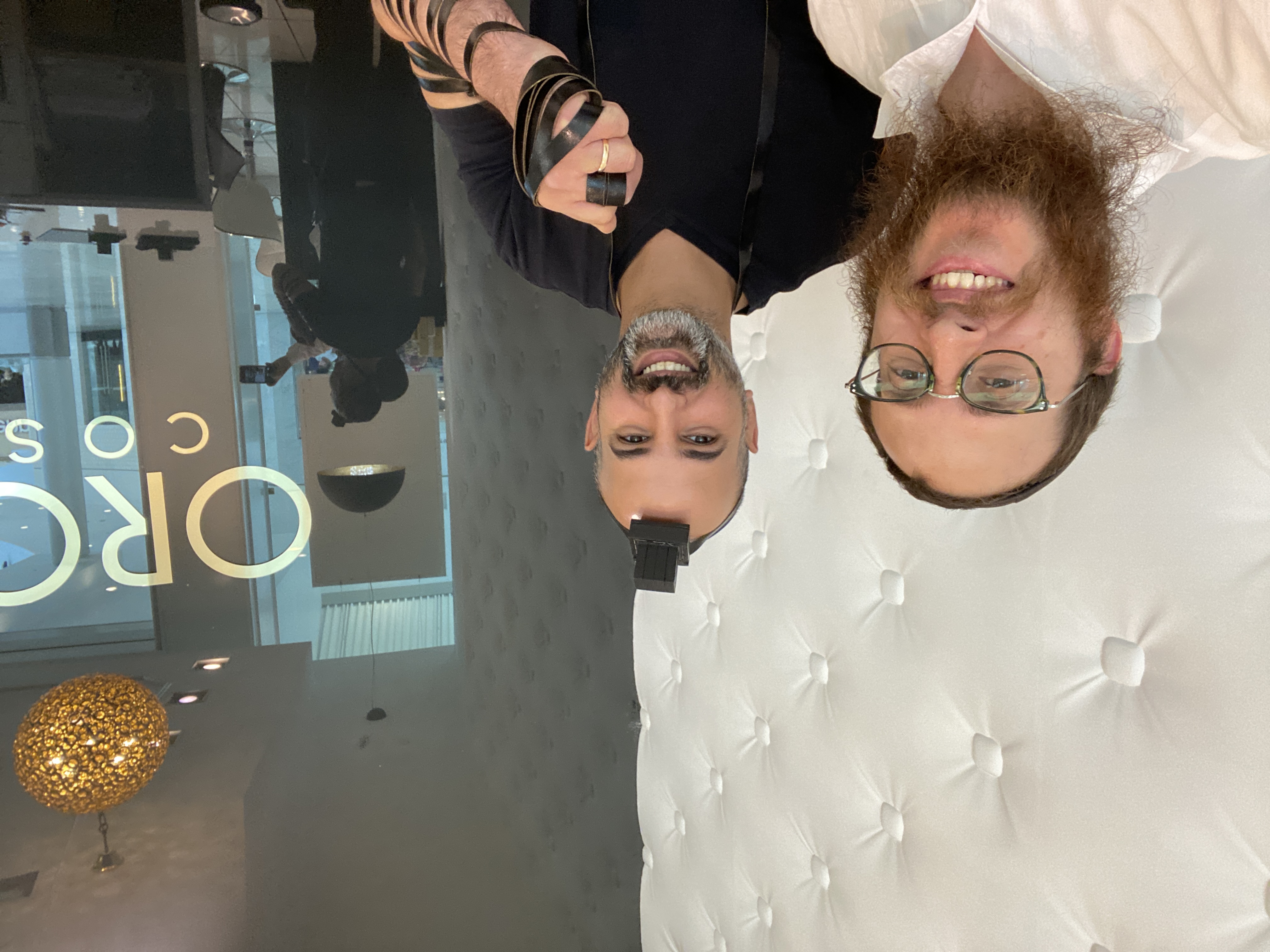 Our first experience with Roseville, California was both daunting and exhilarating. Rabbi Cohen, the shliach in nearby Sacramento, knew of two Jews living in Roseville. One of them gave us barely more than a lukewarm reception, and the other, while he was glad to meet us, told us we would be crazy to open Chabad in Roseville. But, as we drove around the city and perused the aisles of the local supermarket, we were delighted to see that there was a well-stocked kosher aisle. While most contain nothing more than jarred gefilte fish, matza ball mix, and yahrzeit candles, this aisle had the good stuff - kosher candies, junk food, and snacks!

“Roseville must be an up-and-coming Jewish center,” we thought. This hint of Jewish infrastructure helped us cement our decision to open a Chabad center in the area.

But we were right, in a way - Roseville is a rapidly growing metropolitan center. What started as a small railroad town has grown into a large, spacious city, with beautiful parks and wide, open streets. Ten years after Roseville started its urban renaissance, it received its most significant development: Chabad of Roseville, the first organized Jewish presence in the city.

We started with the usual assortment of programming: holiday events, occasional minyanim, Shabbos meals, and more. After a few years, we stumbled upon a challenge that is fairly common to Chabad shluchim: our children were growing older and needed a solid chinuch option. We collaborated with neighboring shluchim and formed a small boys’ class. Things snowballed from there, and we now have a school of over a hundred students. It’s become a real gem in the area, as our high standards in both kodesh and chol attract not only neighboring shluchim, but many community children as well.

As our school grew, we needed to find qualified teachers. We put advertisements in local newspapers and websites, seeking a math and English language teacher. One applicant in particular, Natalie, seemed to be a great fit. She was sweet, friendly, and open to working in our unique environment. We discussed some of the standards and hashkafos we expected of all our staff - even the general studies department - and she was very respectful and agreeable.

A short time after we hired her, she told us that her maternal grandmother was Jewish.

“I didn’t grow up Jewish or do anything Jewish at home, though,” she told us.

“But that still means you’re fully Jewish!” we told her, excitedly.

Natalie, who also helped in the office and preschool, quickly picked up on her lapsed Jewish knowledge. She learned davening songs from the preschool classes, holiday rituals from our events, and more from visiting other shluchim who are a part of our parent body.

In fact, she grew so connected to Yiddishkeit that we told her about Machon Chana, an institute in Crown Heights, Brooklyn, for baalos teshuva. We helped with the financial arrangements and waved her off on her flight to New York.

Our school may have lost a beloved teacher, but Crown Heights has gained a proud, frum young woman - who also teaches in local schools there.

This is why we put so much effort into our school. We know that it affects not only our students and their families, but our staff and teachers as well.

Just down the road is the most popular attraction in Roseville - a sprawling shopping mall. Malls seem to be magnets for Israeli kiosk vendors, and our mall in Roseville was no exception. They’re usually single and open for any adventure that comes their way. We often hosted them for Shabbos and Yom Tov while they were in town.

Shachar was a typical chiloni who knew next to nothing about Yiddishkeit. When he first walked into our home for the Shabbos seuda, tattooed to the hilt and necklaces dangling from his throat, I immediately turned to my wife and said, “This guy’ll be frum one day.” Something about Shachar told me that he was warm and open to accepting Yiddishkeit.

Shachar continued to visit us periodically for Shabbos meals, even after his mall kiosk closed and he was out of work. He called me up one day and said, “Rabbi, I feel like I need to keep Shabbos this week.”

“Of course, you can stay with us,” I answered. “But what happened?”

“I was in a bad accident,” he told me, emotionally. “It could have been much worse, but Hashem saved me. I owe Him.”

After that Shabbos, Shachar became more involved and came to learn with me often. He was interested, but… Against our vehement arguments, Shachar got involved with a local non-Jewish girl and moved in with her. We tried to convince him to break up with her, but he just shook his head, sadly.

We arranged for him to stay in our Chabad House, and he broke up with his non-Jewish girlfriend. But Shachar still seemed lost. He had no job, few friends, and just seemed to wander aimlessly.

“You need direction, Shachar,” I urged him. “There’s a wonderful yeshiva in Morristown for baalei teshuva. I think you’d love it!”

Shachar balked at first, but, gradually, allowed himself to be convinced. We applied for scholarships on his behalf, and sent him off to Morristown with hopeful hearts. When Shachar called us from yeshiva, we could hear the smile in his voice and the joy in his heart. Shachar had found his purpose in life.

After yeshiva, he decided to return to Israel. He shared with us his concerns about returning to his old friends and getting sucked back into his old way of life. Baruch Hashem, Shachar was able to remain strong.

He recently forwarded us a snippet of his daily WhatsApp shiur. It gave us such nachas to hear him speak on Tanya and Rambam so fluently.

I had just finished saying viduy with an elderly woman in hospice. Her family all sat around in morose silence as I said the final prayer for her.

“She’s just suffering and hanging on,” burst out one of her daughters. “She refuses to move on and find peace.”

“What are your burial plans?” I asked, delicately.

“None,” she answered succinctly. “We plan to cremate.”

“That may be it,” I suggested. “Her soul won’t leave without the assurance that it will have a proper Jewish burial. Promise her that you will. Don’t worry; I’ll help you with all the arrangements.” I gathered my things and looked back at them. “Tell her. She’s waiting.”

I exited the hospice and went to my car. I decided to take care of my promise right away and sat there for a few moments, searching for the numbers of the burial society and Jewish cemetery. I was just about finished composing my text to her daughter, when she herself came flying out the doors. She ran up to my car and I could see she was in shock.

“What happened?” I asked.

“We did exactly what you said. We whispered in her ear that we would give her a proper Jewish burial.” She paused for a long moment and then continued in a strangled voice. “She passed away, peacefully, after hanging on for so long. I can’t believe it!”

As promised, her mother was buried with proper dignity, according to halacha.

Hashgacha pratis is not a crazy coincidence from a last minute change of plans. It's a clearly defined set of events, following a plan that Hashem put in place, hundreds of years before. We saw this clearly for ourselves not too long ago.

Our school has been steadily growing year by year. We started in our Chabad House, renting trailers and storefronts as we ran out of space. We knew we needed a more permanent solution. We drew up a set of plans for a beautiful center with plentiful space for our school, Chabad House, and mikvah. Our plans were approved and we’d raised a bit of money when Covid hit and everything shut down.

About two months ago, we received a sizable donation.

“We always go to the Ohel to ask for brachos for whatever we need,” I said to my wife. “We should go and say thank you as well.”

A few hours later, I was on a plane to New York. I switched on the WiFi and started searching for rentals to house our school while our building was under construction. We’d already searched for buildings for sale before drawing up our own plans, so I was already quite familiar with the available properties.

One listing caught my eye and I held my phone closer in surprise. It was a church for sale, a three acre plot with a 9,000 sq ft building, including a worship room that would be perfect as an auditorium, and classrooms surrounding the main floor. It was everything we needed. It was perfect. Strangely, the building hadn’t been advertised and I’d seen no signage when I passed by.

Although we were ready to break ground and start construction, this was too good an opportunity to pass up. When I arrived at the Ohel, I printed out the listing. I thanked the Rebbe and asked for guidance for our next steps.

When I got back home, we checked out the building. The broker told us it had been on the market for a year, but they were having trouble finding a buyer. Although the church had drawn up the plans themselves just 18 years ago, the design didn’t work for them. The worship space was too small for big churches, and the building was too expensive for small churches.

We were thrilled! It seemed to have been tailor made for us. We wouldn’t have to move even a single wall. Everything was in great condition, and perfectly placed for a school building.

A fellow shlucha had been helping us with the floor plan design. We invited her to see the building. As she walked through the rooms, she marveled, “This is the building you designed! It’s perfect!”

We also sought the opinion of one community member who helped us out tremendously with our building campaign.

“You must buy this building,” he declared. “It’s exactly what you need. We’ll continue with the construction for the Chabad House and mikvah, but for the school, this is exactly what you’re looking for.” He was so impressed, he pledged to match our fundraising campaign.

They even accepted our offer, which was a million under the asking price. We went into escrow on erev Shabbos, the day before Gimmel Tammuz. We still have a ways to go, but b’ezras Hashem, we will close on Chof Av, the yahrtzeit of the Rebbe’s father.

No one understands why the church designed their building like that. It didn’t even work for their own needs! But we know - they designed it for us, not for themselves! Even before we were married, certainly before we moved to Roseville, Hashem designed the perfect building for us.