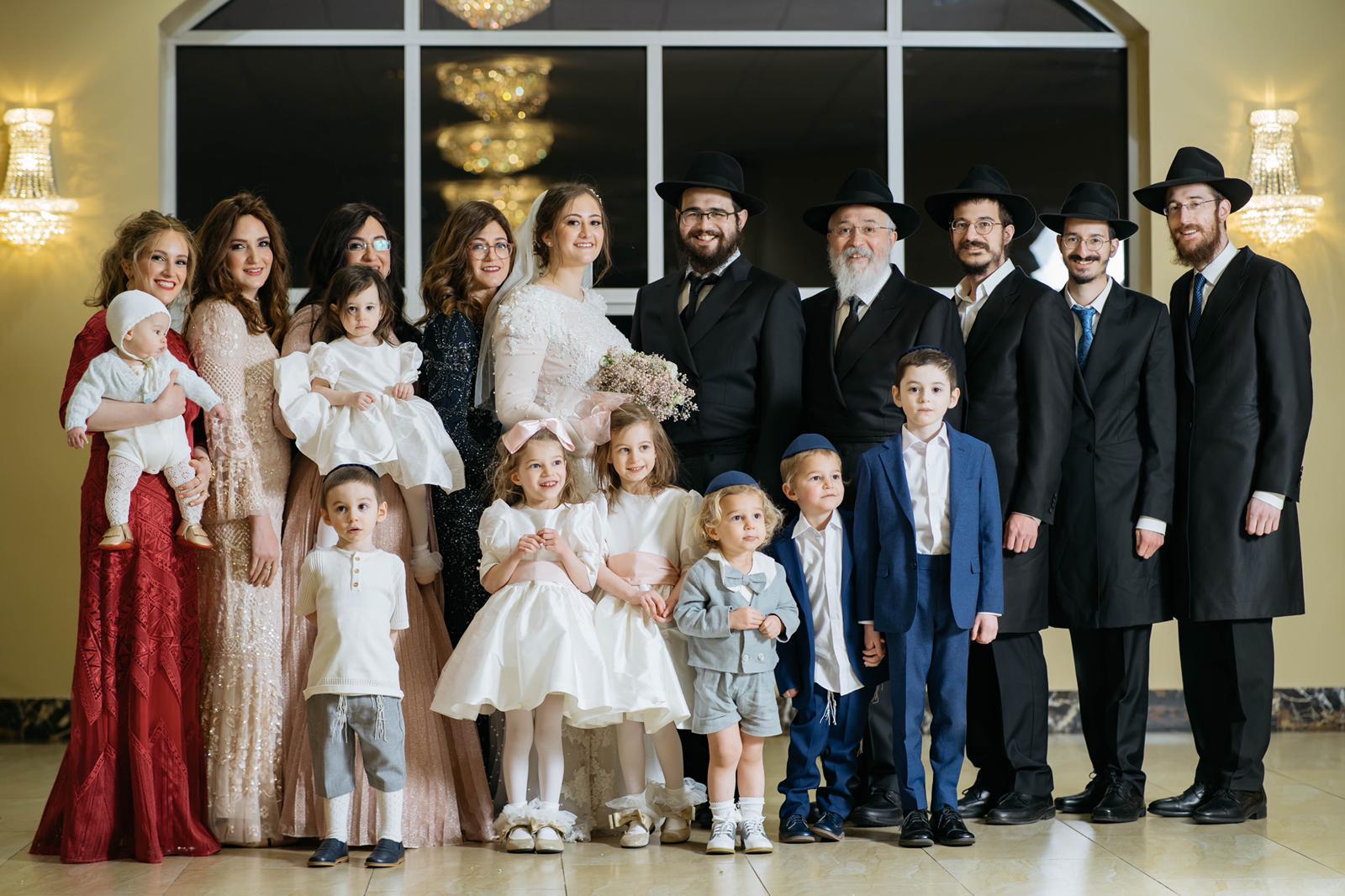 Walking to shul when it’s around twenty-five below is no joke. Neither is breaking the ice around the mikvah’s filter after trudging through three-foot-tall snowdrifts. Welcome to Anchorage, Alaska, where that is our reality for months at a time.

We were zoche to see the Rebbe on a few occasions after we moved to Alaska. On one of those visits, the Rebbe wished us that “the shlichus should be with hatzlacha rabba u’muflaga” - “tremendous success.” The Rebbe’s words carried depths of brachos that had a long-term impact; an impact that we ourselves can only appreciate after three full decades of shlichus. Who would have believed that Anchorage, Alaska would boast its own shul, mikvah, campus, and museum. The entire process was very clearly hashgacha pratis.

Our Chanukah event was scheduled for a cold, wintry day - although that doesn’t mean much when you’re talking about Alaska. One family stood quietly on the side and watched with polite detachment. I tried to catch their attention and involve them. They were perfectly civil, but remained firmly on the sidelines.

A week later, they called, asking about a bar mitzvah for their son, Felix, who had never received any formal Jewish education. Felix’s grandmother insisted on it. I agreed and prepared Felix in the coming months as best as I could. I taught him the brachos, and prepared a speech with him.

At his bar mitzvah banquet, his grandmother got up to speak.

“This bar mitzvah was very important to me,” she said. “I was born in Berditchev, and I remember the melamed that used to come to our house to teach me and my siblings Torah. Unfortunately, the start of World War II ended all semblance of normal life for us, and the lessons came to an abrupt end. I still have a strong connection to my Jewish heritage, especially because we’re direct descendents of a great and holy man. You may have heard of him; his name was Rabbi Yisroel Baal Shem Tov.”

My jaw dropped. I stood up and addressed the crowd as well. “Thank you for sharing,” I told her. “It is especially moving since I’m a descendant of the Maggid of Mezritch, the successor and closest student of the Baal Shem Tov.”

We’ve kept a close connection with this family for the last thirty years. Felix is now a founding member of Chabad of Tampa, FL, while their daughter is active in Chabad of Portland, OR.

The Rebbe sent the Maggid’s descendent on shlichus to reconnect the Baal Shem Tov’s descendents to their Yiddishkeit.

Friday, two days before our daughter’s wedding, was an absolutely crazy day. I was in my office, working frantically on something we needed for the chuppah. I was constantly interrupted by the arrival of guests and family members, as well as the usual Friday bustle. It was 5:00 P.M., leaving me with half an hour to finish all the documentation before the offices closed for the weekend. My daughter walked in, telling me that two tourists had just shown up, wanting to see the shul.

“I really must finish this,” I told her. “Could you show them around the shul instead?”

She walked out, leaving me to finish my work in peace. But, two minutes later, I was struck with a sudden, urgent feeling that I needed to greet the tourists myself. I looked down at the unfinished paperwork and let out a sigh, adding them to Sunday’s to-do list.

I went upstairs to the shul and greeted our visitors, a middle-aged father and his son. I offered the father the opportunity to put on tefillin, in honor of my daughter’s wedding. He agreed. As I started to say Shema with him, he burst into uncontrollable tears, his body shaking with the force of his cries. I was alarmed, thinking that he was having a heart attack. It was clear his son was shocked, too. I held him tightly and asked, “What happened? Are you okay?” After a few minutes, he quieted.

“I’m from a Gerrer family, and was a Gerrer chassid for many years. I don’t even want to think about how long it's been since I’ve put on tefillin.” He looked at his son. “We’re staying here for Shabbos,” he stated, unequivocally.

We had a beautiful Shabbos together - the first in his son’s life.

“If my father’s friends knew that he was celebrating Shabbos…” he said to me, shaking his head in amazement.

To me, there was nothing shocking about it. The spiritual power and pull of tefillin can bring anyone back home.

I went to the mall to search for a glass we could use for my daughter’s chuppah. While browsing a nearby shop, I was approached by an Israeli mall vendor, a young man of nineteen.

He pulled out his phone and showed me a picture of a typical Chassidic youth, curly peyos hanging beside his cheeks and a black, flat hat perched on his head.

“That’s me. My name is Shulem. I come from a large and important Chassidic family.”

He continued to tell me his story:

When I was 13, I was taken to the Belzer Rebbe to put on tefillin. Even then, I was already secretly planning my escape. I collected money for months until I had enough to buy a plane ticket to New York. I cut off my peyos, and with them, all contact with my family. When I landed, I jumped into a taxi.

“Where to?” the taxi driver asked me.

The only address I knew in America was 770 Eastern Parkway, headquarters of Chabad Lubavitch. He dropped me off in front of the imposing, red brick building. I knew not a soul. I refreshed myself with the cookies and coffee in the shul and planned my next moves. I didn’t have many options, so despite the freezing weather, I curled up for an uncomfortable night’s sleep on a hard bench in the subway station directly in front of 770.

R’ Mottel Nagel passed by and woke me up.

“What are you doing?” he asked me.

“Trying to sleep,” I rudely replied.

“Here?” he looked around in dismay. “Come sleep in my house,” he offered.

“I don’t want to hear a word about Judaism,” I warned him.

I ended up staying with him for a few months. He faithfully kept his promise and did not bother me about Judaism at all.

“Well,” I said when Shulem had finished his story, “Why don’t you join us for Shabbos? And come to my daughter’s wedding, too!”

“When I spend Shabbos with a frum family, I’m overwhelmed by childhood memories,” he told me, his eyes shining with unshed tears. “I can’t live with myself. I stay as far away as I can.”

Disappointed, I waved goodbye and continued my preparations for the wedding.

At the first sheva brachos, we ran into issues. We needed panim chadashos, someone who hadn’t attended the wedding. Everyone in the community had been there, so who could we invite? I called Shulem and begged him to do me the favor of being our panim chadashos. He graciously agreed and seemed to enjoy himself. He was social and friendly and got along with our other guests. I honored him with reciting the brachos and he cordially complied.

A few months later, Shulem moved to another state. Years later, when I asked the shliach of that city about Shulem, he told me that Shulem still remembered the sheva brachos in our Chabad house with warmth and appreciation.

In a world that tempts young people to leave the path of Yiddishkeit, it’s comforting to remember Shulem: a young man who held deeply embedded memories of the Shabbos tables of his youth so firmly ingrained in his mind that nothing could erase their impact.
—-----------------

In Alaska, summer days feel especially long. Between May and July, there’s no real “nightfall” - only twilight. The chuppah was called for 6:00 in the evening, but the sun was still shining brightly. We were honored with the presence of Rabbi Sholom Ber Levitin, the first head shliach of the Pacific Northwest and Alaska. Another of our guests was Alaskan icon Vic F. His grandfather was a rav in Libau, Latvia, and his father was a famous journalist who interviewed Lenin and Stalin themselves. Vic helped form the Alaskan constitution, pursued a career in Alaskan politics, and founded a wing of the University of Alaska.

Rabbi Levitin, as a dedicated chassid of the Rebbe, was making his rounds with all the guests, offering to help them put on tefillin. He’d never met Vic before and definitely didn’t know about Vic’s secular background. He approached him as he’d approached everyone before him, and offered him a chance to put on tefillin. Vic agreed, at the exact moment that the band struck up Dalet Bavos, an emotional and compelling niggun of the Alter Rebbe, sung exclusively at chuppas and other special occasions. Seeing that the chuppah was about to begin, they both returned to their seats.

After the chosson shattered the glass and the crowds had dispersed with cries of, “Mazal tov!” Vic approached Rabbi Levitin.

“You said you’d put tefillin on me,” he reminded him.

“Of course!” Rabbi Levitin said, taking out his tefillin.

Senator Lisa Murkowski, stepping down from the chuppah, paused in absolute disbelief as she witnessed Vic F, well-known skeptic, praying with a bearded rabbi.

A week or two later, Rabbi Levitin gave me a call.

“You remember that old guy from the wedding? You must get him his own pair of tefillin!”

I contacted Vic and we arranged a time to meet. He asked for a book about the meaning of tefillin.

“I’m an academic, rabbi,” he explained. “I like to thoroughly research before I commit to something. I want to understand what I’m doing.”

A few months later, he called me back with disappointing news.

“I don’t know, Rabbi,” he told me. “I read the book, but I still don’t understand or agree with it. I don’t think I’m ready for tefillin.”

What drove a man with such strong convictions to not only agree to put on tefillin for the first time in his life, but to initiate and ask for it himself? The only explanation I have is, as the Rebbe explained, when the chosson recites the ma’amer of Chassidus, it’s an invitation for the neshamos of all the previous Chabad Rebbeim. It must have been their spiritual presence that had an effect on this self-proclaimed non-believer. He may have only put on tefillin once, but that placed him above the ranks of “karkatfa di’lo manach tefillin” - “a head that has never worn tefillin.” His pintele Yid shone forth, overcoming his self-imposed limitations of logic and reason.

Mr. Adler knocked on the Chabad House door, looking for the rabbi. I was out, but my children’s Lubavitch homeschool teacher was there and asked him what he needed.

“I would like to put on tefillin,” he said.

My son Mendy, who was learning with his teacher in the Chabad House, was just seven years old at that time, but he already knew how to put on tefillin. Hearing Mr. Adler’s request, he eagerly climbed up on a table so he could reach Mr. Adler’s head to help him wrap the tefillin around his head and arm.

I met Mr. Adler myself when he attended shul the next day for Shabbos services, and over the years, we developed a close connection.

Mr. Adler’s grandson recently celebrated his own bar mitzvah and laid tefillin for the first time. My son, now grown, was happy to assist their family again, all these years later in his own Chabad House in Mat-Su Valley, Alaska.