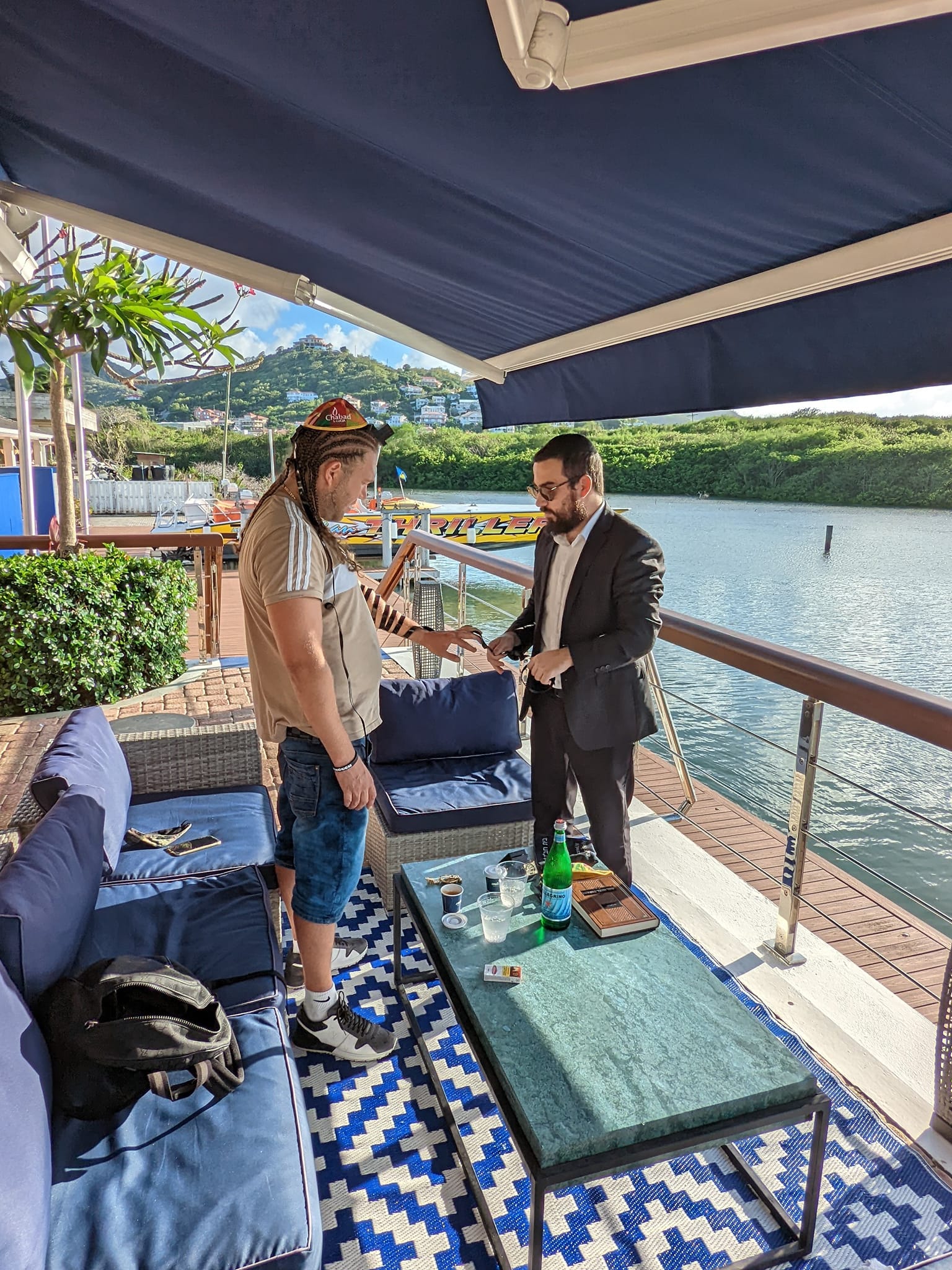 St Lucia has a small population of about 180,000, and only a fraction of that is Jewish. Our community is a mix of permanent and part-time residents. Counting all the full-time locals, seasonal residents, and businesspeople, there are around two hundred Jews on the island. In our four years of shlichus so far, we’ve personally met over a hundred Jews and eagerly search every new face we see for Jewish features. There’s also a large number of tourists that flood our tropical island every winter. Through them, we reach thousands across the world.

Our community may not be very big, but we don’t define success based on numbers. We define success by the influence on a person’s life - even if that’s just one person. According to Dunbar's theory, it’s only possible for a person to have close relationships with a hundred and fifty people at one time. If that’s true, it means our “small numbers” allow us to have meaningful and profound connections with a large percentage of our community!

Before settling in, we visited St Lucia for Chanukah, to see if the shlichus would work for us. As part of this trip, we decided to host a menorah lighting. We had only one RSVP, but continued to pour effort into the event, hoping the word would spread. Within an hour of starting, our two families were joined by another twenty people. Jewish passersby, many of whom were vacationing in the area, saw our menorah and decided to celebrate with us.

As we started to light the menorah, another family walked in. With a pronounced British accent, the mother told me, “I can’t believe this! We always go on vacation this time of year, but this time, while we were planning our trip, I forgot to pack a menorah! My kids were complaining about not celebrating, so I told them we’d figure it out. I really had no idea what to do. As we walked into our hotel, we saw your menorah lighting!”

We came back a few months later for a second visit. We rented a villa and planned to host a Shabbos meal, although we had no idea who would come.

A man came over to me while I was at the bank and asked me, “Are you Lubavitch?”

Of course, he was, and he became the first guest on our list.

Soon after that, another shliach told me about a community member of his that was visiting St Lucia at the time. He was guest number two.

I bought a Facebook ad to advertise our Shabbos meal, hoping it would attract at least one person. On Friday afternoon, I received a call from a man who introduced himself as Harry and said, “A friend of mine saw your ad on Facebook. Can I come for Shabbos?”

“Sure!” I answered, happily.

“Can I bring a friend and his family?”

We were more than eager to meet some more Jews. Harry is now one of our biggest supporters.

Twenty people wound up joining our impromptu Shabbos meal. We could see that people were clearly very interested in establishing a Jewish community, so we decided we wanted to get more involved.

I went to see Izzy, a religious Jew who owns a business on the island. “I don’t see how Chabad can be sustainable here,” he advised me.

“My local manager, Jamie - but he’s very unaffiliated. He won’t want to come to shul.”

“Let me just meet with him,” I insisted.

He called Jamie, who came in and shook my hand warmly, excitedly saying, “Finally, you’re going to open a shul in St Lucia!” His family ended up attending quite a few events.

We met so many people like that - people who were thirsting for a deeper connection with their Yiddishkeit. We knew Chabad in St Lucia would do just fine. At the end of that summer, we moved here for good.

I got a call about Steven, an old man who’d lived in St Lucia for a while. He wasn’t doing well and could benefit from a visit.

I went to the hospital and searched for his room. When I walked in, Steven’s eyes were closed, and he seemed to be unconscious. I asked the nurses if he could hear or understand anything. They shrugged.

“He’s been like this for two weeks,” they said. “We don’t know if he understands anything at all.”

I sat by his bedside for a short while. I recited Shema and some chapters of Tehillim, and I told him I would be back the next day.

When I returned as promised, Steven’s daughter had arrived from the UK to say goodbye.

I asked her, “Can I put tefillin on your father?”

“Dad grew up Orthodox,” she told me, “but at sixteen, he decided it was no longer for him. He left his Yiddishkeit, his family, and his home. Ever since then, he’s absolutely refused to put on tefillin. So, no, sorry. You can’t put tefillin on him.”

I took solace in the fact that he’d put on tefillin between the ages of thirteen and sixteen. With nothing more to do, I opened my siddur to Viduy and began to recite it aloud. When I reached the portion of Adon Olam, I started singing it to the well-known tune sung in every synagogue. Suddenly, he opened his eyes, stared straight at me, reached out for my arm, and squeezed it tightly. He continued looking at me, eyes burning with quiet intensity, the entire time I was singing. When I finished, he dropped his hand and closed his eyes. I got a text a few hours later. It was his daughter, letting me know that her father had passed.

The next day, I asked if I could come to see her.

While we were speaking, she told me the family planned to cremate her father.

“I’m sure you know the importance of a Jewish burial,” I told her. “If it's a financial or logistical issue, don’t worry, we can take care of it. Whatever needs to be done, we can do it.” She was very thankful and appreciative. She directed me to her brother, the real decision-maker in the family, who would be arriving the next day.

I tried calling her the next day, but she seemed to be ignoring me. I had no other way of getting in touch with her. A few days later, I was at the ATM. I looked a few feet to my left and saw her and her brother. I immediately approached them and brought up the burning topic of their father’s burial. Unfortunately, they had firmly decided to cremate him and refused to budge from their position.

That Shabbos, as the niftar was being cremated, I made a lechaim in memory of a Jew who returned to Hashem in the last moments of his life, but was unfortunately cremated. I urged everyone at the table to take on a hachlata in his honor, and led the way by pledging to create a Jewish cemetery in his memory.

A few months later, I received a call from a Londoner. “I met a woman today who told me that she is Jewish,” he began. “She told me she has no Jewish experience except that the rabbi in St Lucia was kind to her. She also told me that the rabbi is upset at her because she cremated her father. I tried to tell her otherwise, but I wanted to talk with you so I know what to tell her.”

“Of course, I’m not upset at her,” I answered. “Everyone does the best they can under their personal circumstances. What’s important now is to move forward and do something positive to elevate his soul. Let's not leave things with the tragedy of a cremation.”

A few days later, he called me again and sent me a picture of their local shliach putting up mezuzos on her doors. He told me she had decided to light Shabbos candles every week in honor of her father.

We’re also finalizing arrangements to consecrate a Jewish cemetery here, all in honor of this one Jew, who returned to Hashem in the last hours of his life.

Another woman learned the importance of Jewish burial when she heard this story. She had me sign some papers legally declaring her rabbi as the one responsible for her end-of-life arrangements. After 120, she will have the zechus of a proper kevurah.

The Hillers lived in St Lucia full-time and really wanted us to move here. They encouraged us to come and pledged their financial support. Once we finally did move, they and their three children were very active in our Chabad House. They attended all our events and registered their children for Hebrew school.

Our usual practice at our Shabbos meals is to ask each of our guests, in turn, to introduce themselves and share a Jewish experience. On this memorable Shabbos, the Hiller boys shared that they learn about Judaism from my wife every week. That week, they had learned about yarmulke and tzitzis, and they both announced their intentions of putting their learning into practice by starting to wear them. We were both pleasantly surprised with their decision, but weren’t sure if they would be able to keep their word. They were the only Jews in their school, and their kippas would stand out for miles.

Today, the Hiller boys are the proudest Jewish kids on the island, who walk around displaying their yarmulke and tzitzis for all to see.

It is amazing to see the impact chinuch has on children.

Our children are an integral part of our shlichus. Simply by watching how my wife and I go about our daily tasks, they’ve picked up on so much. It’s my five-year-old son who reminds me to bring my tefillin every time before I leave the house.

That’s exactly what happened when, one morning, I offered to take him on a walk along the beach. He held the tefillin tightly, avidly searching the beach for a Jew, eager to take part in our little mission. We didn’t find anyone, so we returned home. Two days later, he asked to go again, but to a different beach. We began walking along the boardwalk when we were hailed by a man named Martin, who we vaguely knew. I told Martin that my son really wanted to put tefillin on someone. He agreed - after all, how could you say no to such an excited little child? My son was so happy as he helped Martin wrap the straps around his arm and say Shema.

“It’s almost my son’s bar mitzvah,” Mrs. Finch told me. “We’re planning to celebrate in Israel, but I want him to be prepared. Can you teach him?”

“It would be my pleasure,” I answered. I figured that while I’m teaching him Hebrew, I’ll be able to inject some Yiddishkeit as well. Mrs. Finch’s next words stopped me in my tracks.

“I don't want you to teach him Hebrew. He’ll spend so much time learning how to say one verse by the Torah that he’ll soon forget. There’s no point.”

“So what do you want me to teach him?” I asked in confusion.

“Teach him what it means to be a Jew,” she answered softly. “Tell him why two Jews who meet in a faraway country somehow feel instantly connected. Teach him who we are and where we come from.”

It’s my privilege to teach him Torah at our weekly classes and to show him how to put on tefillin.