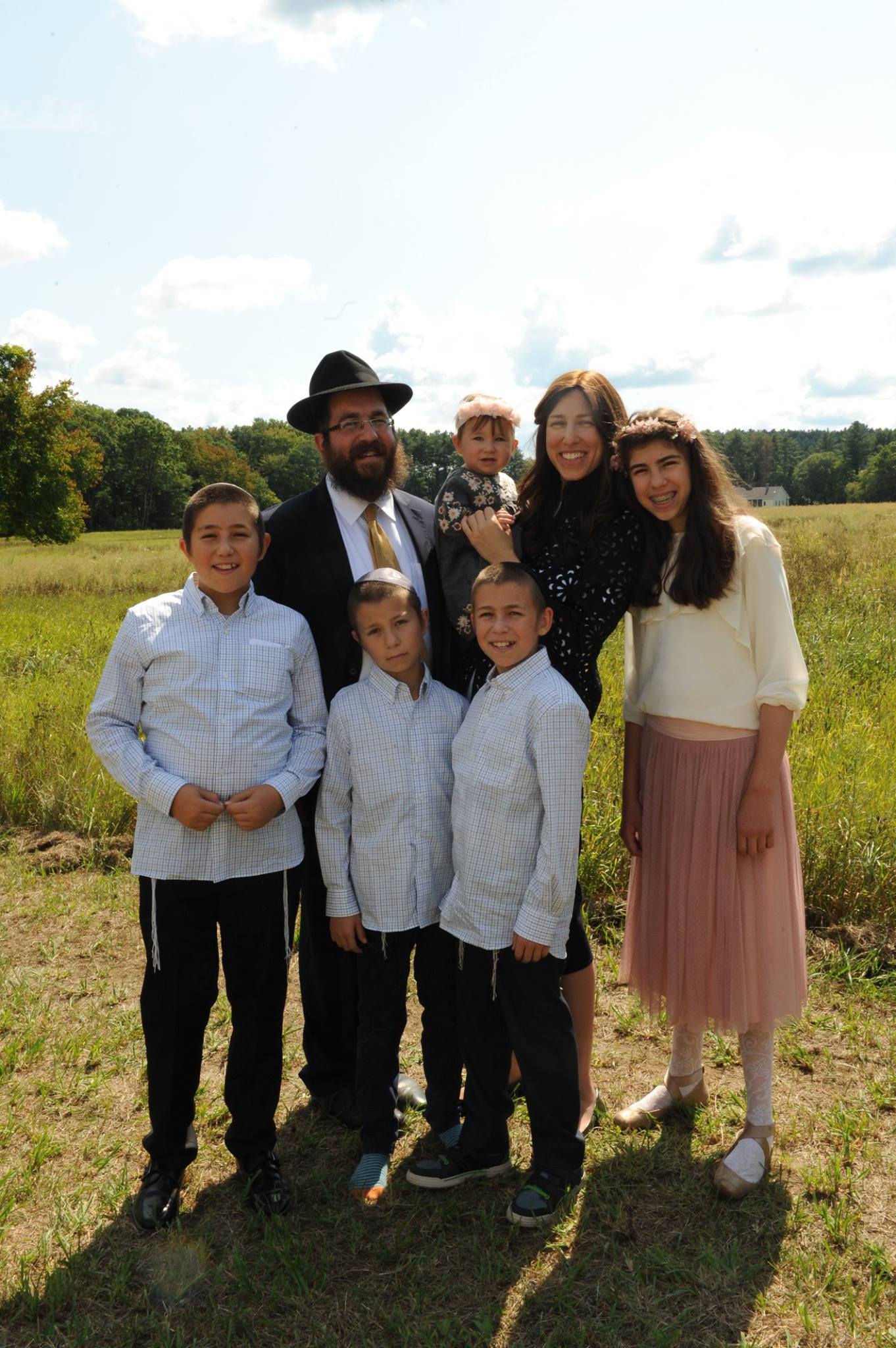 On that cold winter night in 2006, we pulled up in front of our new home. There were no bells and whistles, no welcoming committee, and no friendly neighbors bearing platters of chocolate chip cookies.

It was just dark, cold, and very late. We unpacked a few things, set up the beds, and tried to get some rest.

But how can you sleep if your new house is freezing cold? After tossing and turning for most of the night in the cold, I went downstairs and sighed. There were piles of boxes everywhere, we didn’t know a soul in town, and… hey, what was that? The front door was wide open!

That’s why it was so cold! As I went to close the door which had been open the whole night, I realized that Hashem was sending us a message: As shluchim, our job was to open our door wide to make every Yid feel at home.

With that warm welcome, I knew it was going to be good.

We unpacked our boxes and were ready to get started, but there was one issue: we didn’t know a soul in town!

So I did what I had to do. I got a list of phone numbers and started making cold calls.

It wasn’t the easiest thing, but we had to start somewhere. I went through the list one by one, calling each number and asking if they were Jewish. If they said they were, I told them that we were opening up a Chabad house in the neighborhood and we would love to meet.

People were polite enough not to hang up on me, but they gently tried to suggest that we had picked the wrong town. Nicely enough, most of them told us that they weren’t interested.

Despite that, I didn’t give up. I continued making cold calls and managed to form some good relationships with the few who responded positively. I started learning with some of them, and I invited them to our grand first event: a Purim party!

The next event we hosted was a model matzah bakery. We made sure to advertise this time, and baruch Hashem, we had a nice crowd.

On Shavuos, we had our first minyan.

In the weeks leading up to Rosh Hashana and Yom Kippur, we advertised that we would be davening in a nearby hotel. Baruch Hashem, we got a beautiful response. About 100 people showed up! In just a few short months, we went from knowing nobody to having a packed house.

At that point, we felt ready to start making more programs. I started giving shiurim, we made some events, and we even opened a Hebrew school. That first year, we had two students. Now, we have forty.

People liked what we were doing and started bringing their friends. Slowly but surely, the crowd began to grow. We didn’t know them and they didn’t know each other, but as time passed, we all became very close.

About two years after we came, I was having a bit of a rough time. I wasn’t feeling too great about our shlichus and kept thinking, Yisroel, what do you have to show for all of this? Is it worth all the effort?

That night, I got an email from a woman who attended my shiurim: “Rabbi, I just want to let you know that because of your classes, my husband and I have started keeping kosher at home. We’ve also decided to keep kosher when we travel.”

I was stunned. That email came exactly when I needed it. Just when I was wondering if anything had come out of our efforts, I had gotten an answer.

We have a few nursing homes in our area, and I try to visit the Jewish residents as often as I can. There was one woman, a Holocaust survivor, who I would visit every other week. She loved to talk, and I would sing niggunim to her.

The day after Yom Kippur one year, she called and asked if we could speak. She asked if I owned a Torah for my shul, and I told her that I did not.

I tried explaining that it was very expensive, but she insisted that she wanted to do it. I was pretty uncomfortable to take so much money from her, so I called her daughter to discuss it. Imagine my surprise when her daughter knew all about it! “Don’t worry,” she reassured me. “I spoke with my mother already. She’s going to buy you a Torah!”

Apparently, this woman had grown up in a frum home. She remembered how her grandfather had donated a Torah to a shul in Hungary which was destroyed in the Holocaust, and she wanted to honor his memory by doing the same.

We made a big celebration when the Torah arrived. Close to 200 people came, and we closed off the streets to dance and lead the Torah to its new home.

We arranged minyanim at the nursing home a few times so this woman would be able to see the Torah she donated. One day, her family called. She was nearing the end of her life. Could I please come to the nursing home?

To make the last hours of her life more meaningful, I brought the Torah which she loved so much, to her room and then sang and even danced with her the melodies that she loved. She sat up in bed and watched and even hummed along, a peaceful smile on her face.

In the last few moments of her life, she was content.

There’s another Holocaust survivor in our community who I call every week. She told me how she always loved and believed in Hashem, even when she was in Auschwitz. When factory owners would come to choose which prisoners they wanted to take as workers, she would never push others out of the way to get chosen. But Hashem was good to her and she was eventually chosen to work in a factory, thereby surviving the Holocaust.

One day, her granddaughter approached me. She was very torn, caught between her desire to marry her non Jewish friend, and the knowledge that her grandmother had survived Auschwitz and wanted her to marry within the Jewish faith. We spent hours discussing this and discussing the long chain of tradition from which she comes, all in a gentle and respectful manner.

In the end, she broke it off. She told me that the only reason she was able to internalize everything we had spoken about was because I was patient and didn’t push her.

Baruch Hashem, she married a Yid and has three adorable children.

At a certain point, we were busting out of our rented space and could really use our own property. Even though we didn’t have any money to buy, I began looking at the nearby listings. One day, I heard of a big house that was being sold for $830,000 to avoid foreclosure.

I went to check it out and liked what I saw. It was a nice size, set back from the street and surrounded by acres of fields and forests. We had no money though, so it took us six weeks to build up the courage to make an offer.

The woman who was selling it was a devout Christian. When she heard that a religious rabbi was interested, she told her realtor not to show it to anybody else! “I put so much work into my home because I wanted it to go to my children to serve G-d,” she told me, “but if you end up with it, I’ll be happy.”

I negotiated with the banks and got the price down to $650,000. One day, while on the way to our model matzah bakery, my attorney called. “We lost the deal,” he told me. “The bank is foreclosing tomorrow despite our verbal agreement. Maybe go to the auction.”

Our six months of planning and fundraising was about to go down the drain, but 150 people were waiting for us at the Pesach program. There was nothing I could do. I just continued driving to the model matzah bakery.

When I came to the auction house the next day, my heart sank down to my toes. There were at least ten other experienced buyers and developers, and I knew that we didn’t stand a chance. Within a few minutes, the price jumped to $900,000 and we lost the property.

When I got back home, I was greeted by my wife and kids. “What happened? What happened?” they shouted. I said three words: “Gam zu letovah.”

I wrote an email to a few of the balebatim who had wanted to help with the property, explaining that we firmly believe that everything Hashem does is good. I wrote that even though it didn’t seem that way, I knew that what happened at the auction was for the best.

Seven months later, the auction house called. “The guy who bid on the property walked away from the deal,” they told me. “Will you take it for $580,000?”

Of course I would!

That day, I went back to that old email I had sent and pressed reply all. “Now we can finally understand how it was all for the best!”

We broke down walls, renovated, made a beautiful kitchen and library, and built a parking lot. In 2017, we held our grand opening with over 300 people in attendance.

Since then, all of our activities have grown tremendously. We finally have enough space!

Before we had our new Chabad house, we used to walk over a mile along the main road in town as we went to shul on Shabbos. Each week, I would take one or two of my kids along with me, and we would talk and spend time together.

One week, a car stopped next to us and a well dressed non-Jewish woman got out and started crying. “I see you walking down the main road each week,” she said emotionally, “You’re a Rabbi going to pray, and you’re taking the time to talk with your children. I wish that in today’s modern world, we would all appreciate our families like you do.”

Recently, a woman from my community called to tell me about a Jewish man who had died alone. “Can you help bury him?” she asked. “He has no family here. It will just be you and me at the funeral.”

While I was trying to help out with the plans, I got a call from a shliach in Boston. This man’s cousins from Brooklyn had heard of his death and were trying to contact me. They said he was a seventh-generation descendant from the holy Ruzhiner!

Together with the family, we arranged for the man’s body to be brought to New York, where he had a proper levaya surrounded by his distant relatives. When they sent me pictures of the levaya, I got the chills. This man, a descendant of such a great tzaddik, could have been buried alone in Massachusetts. But because, b’hashgacha protis, we were there to help, he was given a proper kevurah in the Nadvorna section of a Bais Hachayim.

That’s the job of a shliach: to help people in their time of need. It’s not about big numbers or publicity; it’s about doing whatever is needed to help a fellow Yid.