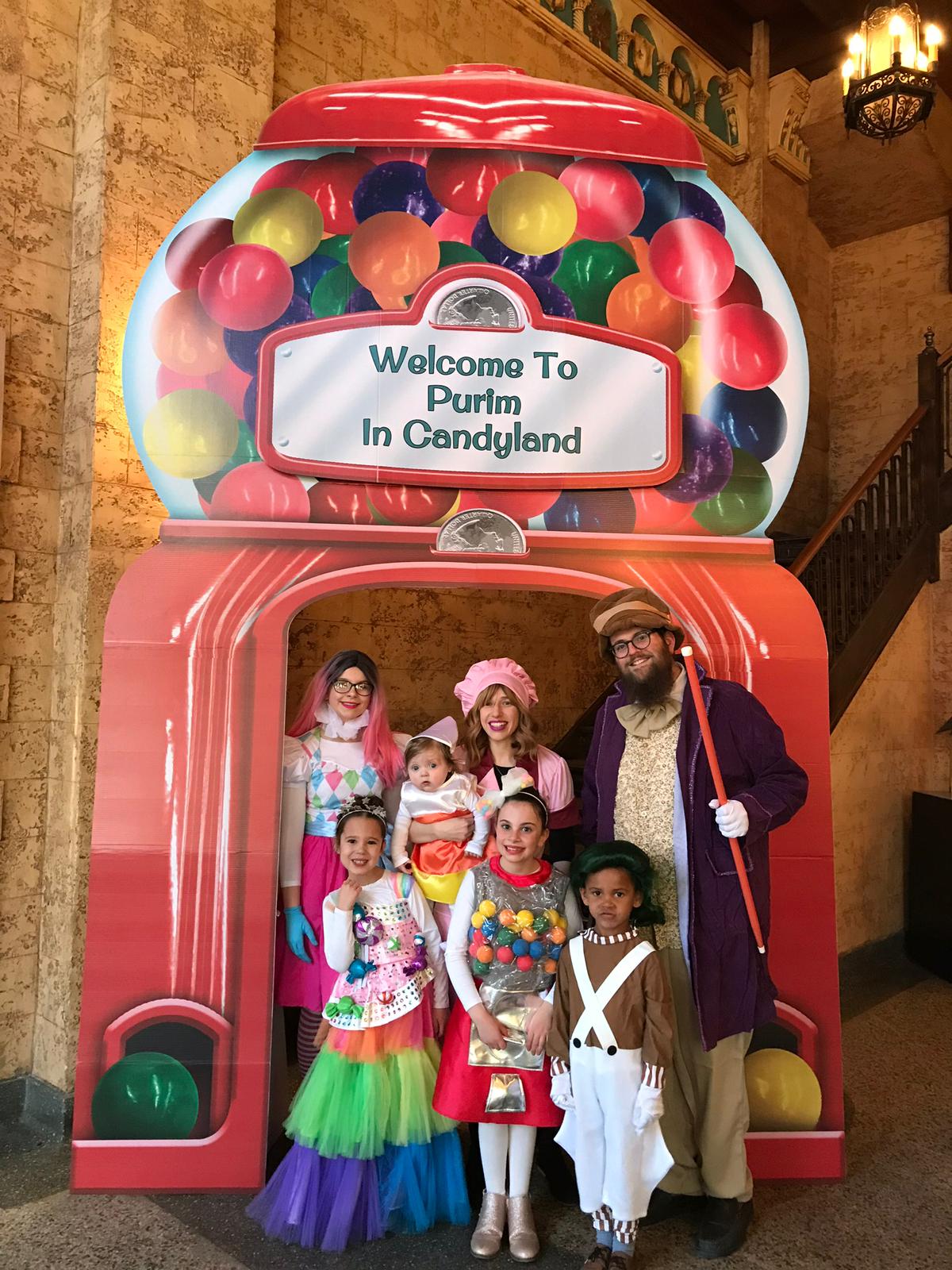 The first time I came to Montana, I was still a bochur. It was the summer of 2004, and my friend Yitzchak Feldman (today a Shliach in Bend, Oregon) and I spent a month here visiting Jewish homes across the state. At the time, I never saw this becoming my permanent home. But still, the Jews I had met remained close to me and when Pesach rolled around I sent Shmura Matza to each of their homes. The feedback I received was amazing.

When summer 2005 rolled around, Rabbi Moshe Kotlarsky asked me what my plans were and I told him I wasn’t sure.

“Well you’ve already created such a strong foundation in Montana,” he said. “What if you went back there?

I was hesitant (hoping to explore more states) but ultimately decided to head back, this time joined by my friend Arik Denebeim (today a Shliach in Palm Springs, California).  Then, my sister and I went back for Chanukah of 2005 and hosted 4 Chanukah events in Billings, Bozeman, Helena, and Missoula. We had spread so much light and so much of the Rebbe’s love in Big Sky Country, that when I was dating my soon-to-be wife Chavie the following year, I asked her if she would be willing to move to Montana?

“Of course,” Chavie said. “I grew up on shlichus. Shlichus is part of my identity!”

We were married in March of 2006 and we arrived in Montana the morning after our first wedding anniversary in March of 2007. The Bozeman community was booming with growth and we knew we had to establish a Chabad house there. We spoke with Rabbi Yehuda Krinsky, who has been our mentor since moving on Shlichus, and he loved the idea, excited for the adventure we were about to embark on.

Life has definitely had its fair share of challenges here in Montana. When we were a young couple, we thought money would be our biggest hardship - we were wrong! Raising children so far away from an established frum community has proven to be infinitely harder.

Montana is a beautiful place to live. There are family-friendly parks and events. It’s a safe place and the natural beauty is breathtaking. But raising Jewish children can be lonely. At first, we figured we’d be like so many other Chabad families and homeschool our kids. But after some time and evaluating the particular needs of our children, we were forced to admit that it wasn't working. We had lengthy discussions with our mentors and Rabbonim and ultimately made the difficult decision to send our children to local schools.

Consequently, our children spend a lot of time with non-Jewish and secular children. Naturally, this comes with a fair amount of hardship. However, it also has some incredible advantages. We are now in touch with many Jewish families whom we wouldn’t know about otherwise. They are coming over for playdates and their parents are in the same school groups as we are, so there’s lots of engagement. Moreover, we’ve managed to have a real impact on the Montana community as a whole. Before our children started in the local schools, they had Christmas parties and concerts - now they have winter events. It seems like a small thing, but there are other Jewish kids in the community and now they are no longer celebrating Christmas at school!

We’ve done more than just change winter parties, we also built a beautiful Mikvah. When we first moved here, Chavie and I were driving 7-8 hours every month to Salt Lake City, Utah. Additionally, we had made this move to spread the joys of the Torah, but how could we teach people about Taharas HaMishpacha without a Mikvah which they can use?

We don’t tend to have large events here, most of our interactions are one on one or at the Shabbos table. I remember getting a call from a woman a couple of years ago telling me she just had a baby.

This girl was frum at some point in her life. She had studied at Machon Chana in New York.  She ended up in Montana and found herself involved with a non-Jewish man. Her relationship with him slowly grew and before long the two were cuddling a baby boy.

I told her not to worry and I would deal with the arrangements. I made arrangements for her to stay at my house and flew a mohel in for Shabbos. The girl seemed lost for most of the weekend. She cried and admitted to being conflicted about naming her son. Her baby’s father wasn’t Jewish, but she knew her son was and deserved a Hebrew name.

I didn’t get to hear the name until the bris. The mohel performed the circumcision and then proudly welcomed Gavriel Noach into the Jewish nation. When I walked over to the new mother later and asked her what the significance of the name was she said: “Gavriel Noach was the name of the Chabad shliach who was murdered in Mumbai. I named my baby for him.”

I could feel the kedusha of the moment. “You know there’s great significance in a name,” I said. The mother smiled and nodded. “I know,” she said and placed a kiss on her baby's head.

A lot of our shlichus come from unique opportunities. I remember two instances, in particular, that involved FedEx and ELAL. In 2008 a group of campers from USY on Wheels - a conservative summer camp - had their delivery of Kosher food lost. FedEx, who was delivering the food, contacted us desperately to fix their mistake and asked for our help getting the camper's food.

It was 11 am and we had nothing prepared. But that didn’t stop Chavie and me. We knew these campers needed their food by 6 pm for dinner. We spent the next couple of hours preparing food and delivering it. The campers were so thankful one of them sent us a personal thank you letter a couple of weeks later.

A few years after that, in 2016, we had another kosher food-related experience. We got a call from ELAL in Israel. A flight of theirs had made an emergency landing in the Billings Airport. Billings doesn’t have international flights so there are no customs agents there and 309 Yiddin were stuck in the airport. A flight from Israel to Los Angeles.

Through the true greatness of Hashem, we happened to have received a food delivery the night before so our kitchen was fully stocked. Chavie went through our kitchen and pulled out anything she could bring. Cold cuts, snacks, even fruit. Then she packed herself and our 3 small children into the car, made a quick stop at Walmart for Kosher snacks, and drove 2 hours to the airport.

“It was a wonderful experience,” Chavie said. “Watching the joy come to these people's faces when we walked in with our boxes of goodies. It wasn’t about the food, but the love! Being stuck in the airport for 11 hours isn’t pleasant, but no one will starve to death either. I think the real beauty here was seeing the unity of Klal Yisrael!”

Jews are everywhere. Even in places we don’t expect to find them. There’s a local University here, the University of Montana Western, and I have a good relationship with a professor over there who teaches education. For a couple of years now, he’s had me come in once a semester to give his students a crash course on Judaism.

Two months ago, on January 15th, I went in to give my crash course and then ended by asking if any of the students had questions. A boy in the back raised his hand. His name was Nick.

“My great grandmother is a holocaust survivor,” he said. “She was Jewish!”

I immediately recognized the weight of what he had just said. “From which side, Nick?”

I smiled. “I’ll let you in on a little secret,” I said. “According to Jewish law, you’re Jewish Nick!”

I knew announcing this in front of his entire class could be scary, but I thought it was important. Being Jewish is something to be proud of, not something to be embarrassed by. I think I threw Nick off, but he recovered fairly well. We even shared a short chat during the break. I think moments like these are why the Rebbe felt so passionately about shluchim going even to the most remote areas - because you never know where you might find a Jew.

Another instance that comes to mind happened just a few days ago. Chavie and I decided to refinance our house, so I scheduled a meeting with a mortgage lender. I came in, greeted the woman, and then sat down to talk business.

We spoke numbers for a little bit and then the woman looked at me curiously. “You know I’m Jewish, Rabbi.”

I gave her a curious look back.

“My grandmother is a holocaust survivor,” she explained. “My mother found out when she was 14, she saw the number on her arm.

Of course, I knew Hashem had sent me to this woman with a purpose. I got her information and promised to stay in touch. This year she heard Megilat Esther for the first time in her life! I was excited to have another opportunity to fulfill the Rebbe’s wishes - no Jew is ever forgotten!

We’ve had some tough times too. A few years back there was a group of neo nazis making a lot of noise in Whitefish. A town that’s over 5 hours away from me. I knew I had to pull the community together and not let them cower. Chavie and I brainstormed and eventually decided to deliver a Chumash to every Jewish home in Montana. We knew the first step to strengthening the Jewish identity of the community required starting at the basics, and what’s more basic than the Tanach?

Today, Baruch Hashem, Whitefish has a shliach of its own protecting the Jewish community!

Relationships are really the basis for Chabad. A few years ago, a young Jewish woman was killed in a car crash on Pesach. Her parents belonged to a Reform community outside of Cleveland and were planning on burying her in a Jewish cemetery in Ohio. When I got the call, (on Chol HaMoed) I immediately went to the funeral home where her body was being held and said Tehillim. Then I sat with her and followed her coffin to the airport, making sure to do the levaya in Montana.

I stayed in touch with her parents throughout the process and that was no small act in her parent's eyes. To this day Chavie and I remain good friends with them. They even donated a playroom to our shul called Kari’s playroom where all the children play.

I want to end with a story that still brings a smile to my face to this day. Early on in my shlichus, I got a call from a crying mother in Westchester County, New York. Through her broken sobs, she told me about her daughter living in Eureka, Montana.

“She’s having a baby,” the woman cried. “My husband won’t come because her husband is not Jewish. Please, help me give my grandson a bris!”

I promised the woman I would take care of it and all she had to worry about was getting here herself. Then I flew in a mohel, organized a minyan and breakfast and we had a bris at a friend's house. Never had I seen such glee on a grandmother's face before.

Today, the daughter is still married to her non-Jewish husband, but her son has a happy, healthy relationship with his proudly Jewish grandparents! There’s also a Chabad house much closer to where she lives and so every day she continues to grow!