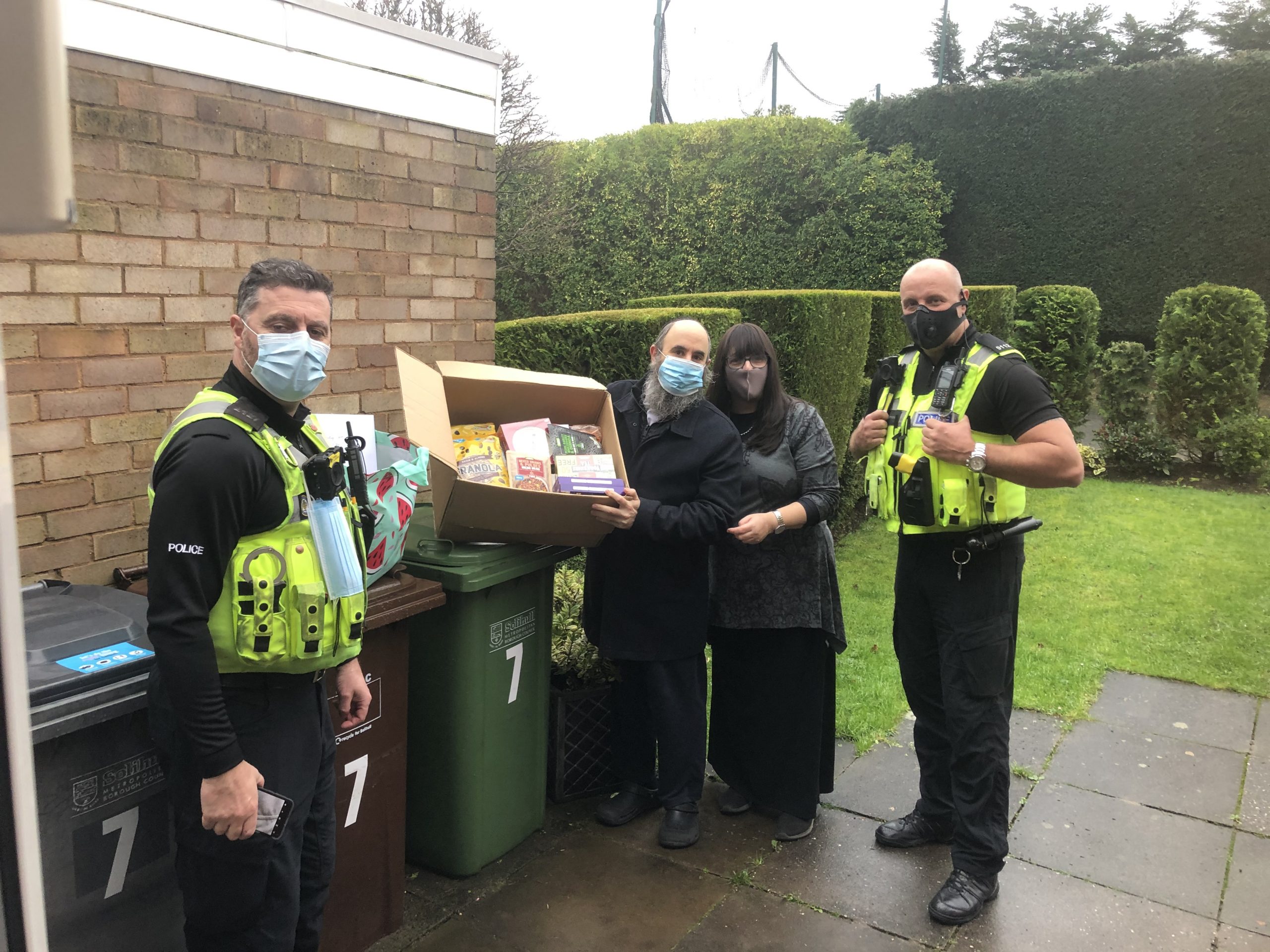 Every Connection To Hashem is a Win - Rabbi Yehuda & Dinie Pink - Solihull, England:

Doing shlichus was always a given for me. My wife and I both come from Chabad backgrounds - my wife was born while her parents were on shlichus in Manchester, and I went to Yeshiva in Kfar Chabad, where I was very close to the Mashpia Reb Mendel Futerfas. He always encouraged shlichus, so we barely had to discuss it when we decided to take on this mitzva.

I remember receiving a call from Rabbi Hershel Rader, who was the shliach in Solihull before me.

“I need someone to replace me,” he said. “I’m spending more time driving my children to and from school than anything else. I don’t have the time to help anyone!”

It was the early nineties, and Shluchim Online School didn’t exist. Hershel’s kids went to school in Stamford Hill, London, over two and a half hours away, and public transportation wasn’t an option. My wife and I drove down to Solihull that week and immediately fell in love with the beauty of its community. Pretty quickly, we knew this was going to be our home.

We moved in a few weeks later. I was excited to get started, but I also knew I had my work cut out for me. To the north of us, in Birmingham, was Rabbi Shmuel Arkush, who’d been taking care of the Midland. He’d brought Rabbi Rader out to handle the area to the South, which stretched all the way down to the Welsh border. That region was now our responsibility. There were numerous small villages and towns scattered throughout the area, with a couple families in each town. There was only one small shul and hundreds of miles to cover. And if that wasn’t enough, I was dealing with an intermarriage rate of over eighty percent!

Fighting that intermarriage rate is one of my main goals, so I’m always reminding anyone that comes across our programs of the importance of a Jewish home. About twenty years ago, I remember meeting a young lady who was living in the area with her non-Jewish boyfriend. She’d grown up in a traditional family, but had drifted away from her Jewish identity once moving away from home.

A few months earlier, we’d been blessed with our first child and were looking for a babysitter. The young girl was looking for extra work.

Before long, this girl was a permanent fixture in our home. She was great with our daughter, and I knew the power keeping her close could have. But we never said anything about her boyfriend. Relationships are a tricky dynamic.

This continued for months, until, one day, this young woman went home to find a note stuck to the front door.

You’re always at that Rabbi’s house, the note read. I’ve had enough. I’m leaving you!

Naturally, the girl was crushed. She spent a few hours mourning her relationship, and my wife sat consoling her. But pretty quickly, I could see something shift. She’d spent six years with this man; singlehood could be an opportunity.

“I’ve never had the chance to explore Judaism,” she said. “Maybe this is it.”

I, of course, encouraged this thought process. Over the next couple of days, she spoke extensively with my wife about the different avenues she wanted to explore. We could sense the excitement she had. But, on the third day, her boyfriend called.

“I’m sorry,” he said. “I was emotional and angry. I shouldn’t have left. Can you forgive me?”

My heart fell. I could feel the progress we made slipping away. But I hadn’t given her enough credit.

I was blown away by her strength. That summer, my wife and I convinced this young lady to visit Israel. She loved it! When she got back from her summer program, she quit her job and returned. She spent three years there. Her growth in Judaism became her main focus, and slowly, she started keeping Torah and Mitzvos.

A little while later, she met a Ba’al Teshuva from France and started dating him. Like most Jewish couples, they were engaged within a few months and then married. Today, baruch Hashem, they live in Canada with small children and are living a full Chabad lifestyle!

I think the unique thing about Chabad is that we don’t discriminate. Many children with non-Jewish fathers find themselves getting rejected. I distinctly remember a family who took part in our Sunday school. Their kids used to be there, on-time, every week.

One Sunday, as I walk out of the school, I see their father. I went over to say hello and shake the man's hand.

“Rabbi,” he said. “I have to tell you how grateful I am. So many places reject my children because I’m not Jewish, and here, they feel at home. We drive 2.5 hours every week to bring them here - it’s worth every minute!”

Just recently, I had a man reach out to me from Upton Snodsbury (yes, the village is actually called “Upton Snodsbury”) to tell me he was going through some tough times. He works for the city in a department that handles cases of child abuse, and the uptick since COVID had taken quite the mental toll.

We did some digging, and, eventually, he showed me his maternal grandmother’s marriage certificate, confirming he’s Jewish. Right away, I started bringing him to events. Then, I brought him to shul, and slowly started integrating him into the community.

A few months went by, and this man continued to grow in his Yiddishkeit. He was learning Torah and davening in the mornings.

It was a magical moment. This man in his 50’s practiced for weeks to prepare. He approached the Torah, wrapped in a tallis, and read the words beautifully. Then we gave him a Hebrew name and danced the way we would any Bar Mitzvah boy. I don’t think there was a dry eye in the shul that day!

Conversions are a tricky thing. I get about 20 calls a week from Goyim asking to convert. Most of them aren’t serious. I think I’ve only seen 3 successful conversions since starting here.

One of them started with a frum man. He had a successful career, a supportive wife, and beautiful children. He believed he had fully settled down. However, much to his surprise, a few months later, his wife decided to leave him. Without any warning, she disappears and takes his children with her.

Naturally, his life completely fell apart. He stopped working, lost his job, and ended up drifting away from Yiddishkeit. He reinvented himself and began a new career. Then, he started dating. He meets this Indian woman and he gets excited, believing he’s been given another chance at happiness. They date for a little while, get engaged, and ultimately get married.

The two live peacefully for a little while until this man begins to rediscover his faith. Now he’s torn between his wife and his religion.

I don’t know what went on in between, but by the time this couple reached out to me, the Indian woman was already growing more interested in Judaism. I put them in touch with the Beis Din, and today, she is well on her way to becoming a frum Jew!

There are a lot of Senior Citizens in our area - the region is too expensive for youth - but money doesn’t solve loneliness. So, sixteen years ago, we started a club where we would serve a fresh and delicious three-course meal alongside entertainment for senior citizens.

For many elderly people, this club was a chance to get out and meet new people. We actually received an award from the Queen for our work and got to visit Buckingham Palace!

During Covid, however, we obviously couldn’t continue hosting these events. And for many people, this meant isolation. It may not sound hard to quarantine in a mansion, but loneliness is loneliness, no matter where you are.

We gathered a group of volunteers and started a meal delivery service. Young people would drive meals over to the elderly and keep them company while they ate. I suspect some people only volunteered because they, too, wanted a reason to escape total lockdown, but regardless, it was an experience that brought many people closer. Our volunteers drove almost seven thousand miles and delivered over six thousand meals!

During our meals program, I got word that there was a Yid in need living not far from me. I got the address and made my way a couple of towns over. The house was truly terrifying. There was no heating, just a small wood fire; things were falling apart, and everything was a mess. But in the middle of it all stood a man with tzizis, a yarmulka, and a very long beard.

I sat down with him and he started to tell me about his life.

“I used to be a professor,” he said. “I taught chemistry at the university.”

He’d moved out there to teach and couldn’t manage to sell his place to leave. But there was no kosher food around, so this man was going hungry. He was a brilliant and eccentric man who desperately needed some kosher food and company. We started sending him volunteers a couple of times a week, and soon enough, this man was fed and happy!

We had many stories of people rejoining the community in some capacity as a result of our meals program. Some started coming to events again, and others kept in touch from a distance. To us, every connection is a win. As the Rebbe said, “the Germans hunted down every Yid in hatred, so we must hunt down every Yid with love.”