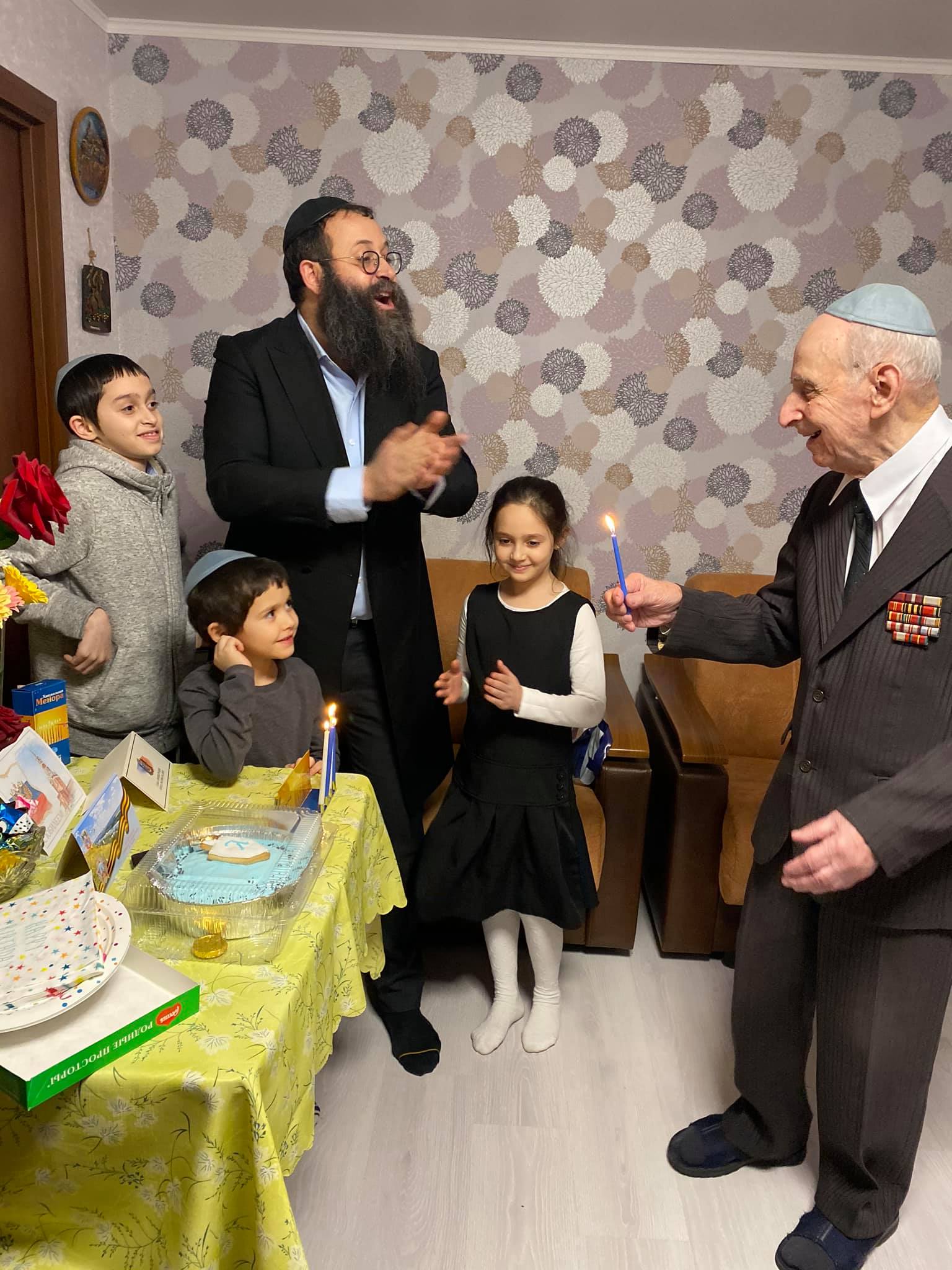 It's funny they say you can find Chabad anywhere that has coca-cola. This week Chabad managed to keep a presence with the famous soda removing its brand.

I’m from Canada originally, and never had any connection to Russia growing up. When I look back at what brought me here, it’s almost amusing. I was in yeshiva in Israel, and my roommate was planning on spending his summer volunteering at a camp in Russia. At first, I had no interest in going - I already had my plans in place to spend my summer in California. But after much cajoling on my roommates end, I gave in and agreed to join him.

It was 1998. We landed in Crimea - and neither of us spoke even a word of Russian. Just two 18-year-old boys, planning to run a camp for kids with whom we couldn’t even communicate. We had a bit of a rocky start, but eventually, we found our groove. I remember a week into camp, a young boy came to me and asked for a bris. Naturally, I was taken aback.

“Go… play some basketball,” I said. “Your friends are all on the court.”

A couple of days later, he came back with the same request. Again, I panicked.

“There’s candy, over there in the dining room!” I told him. “Go get some before it’s all gone!”

But when he came back a third time, I realized this was something I couldn’t ignore. So, later that night, I brought up the issue at a staff meeting. The head counselor wasn’t surprised.

“We have a mohel come every year,” he said. “Whoever wants a bris gets one on the last day of camp.”

I was shocked. I couldn’t imagine what that would look like. Groups of young boys, most of whom have never even heard of matzah or menorahs, all getting brissim? I couldn’t imagine someone developing such a strong connection to something they barely understood. But, lo and behold, on one of the last days of camp came, the Mohel arrived and performed a bris on many of the boys right there in camp.

That summer was my first real experience with shlichus. I watched young men completely abandon the lives they came from for a much more spiritual one. I felt attached to these kids. I felt responsible for them. I called them up every week before Shabbos to ask about their journeys. I felt I was their only connection to Yiddishkeit, and I couldn’t imagine walking away.

I tried to return to my life in Canada, but I found that those boys were always on my mind. It was then that I made the decision to return the following year. But, somehow, that still didn’t feel like enough. I was watching them turn their backs on 70 years of communism; on their parents' and their grandparents' lives. I watched them learn about Torah and Tanach with such joy - it was inspirational. These kids were gaining so much, after only getting a little jumpstart from camp. I wondered what things would be like if we made them a camp similar to the caliber of of Jewish camps in the States.

It was this thought that inspired me to start Camp Yeka. Yeka was modeled to enrich the lives of Jewish children, both spiritually as well as physically. We planned fun adventures, daytime trips, and overnights, as well as shiurim, davening, and learning. I gathered the best staff I could and poured my soul into this project.

It was never easy, but I know it was worth it. Yeka changed the lives of these children. Every summer was spent planning new ways to inspire and enlighten these young minds.

I truly felt these children were my calling - however, when I got married, my wife didn’t feel the same. She preferred to settle down somewhere a little more stable, with a Jewish community and plenty of kosher food.

My wife and I spent a few years in California, had a baby, and settled into our traditional lives. But I wasn’t thrilled. I knew there was more for me out there. One day, I got a call that there was no Rabbi in Rostov, and the Jewish community was looking for someone desperately. My wife and I discussed it, and she agreed to go visit and see what it was like. We spent Shabbos there and davened in the communities 150-year-old shul.

The shul was built by Cantonist soldiers who felt rejected by the Jewish community after returning from 25 years in military service. The community found them ignorant and disconnected, due to their large gap in Yiddishkeit. But these men felt passionate about serving Hashem and decided to build a shul of their own. Rostov had 12 synagogues at one time, but sadly, they were all confiscated or destroyed. Incidentally, the Cantonist Shul is now the last one standing.

The few days we spent visiting Rostov were inspiring. We encountered countless individuals desperate for connection to Judaism. They felt so blessed to have us join them and begged us to stay long-term. When my wife and I eventually left for Israel (where we were continuing to after Russia) we both knew we had to go back.

“This is an incredible opportunity to really do something great,” she said. “We need to go back to Russia. It is our calling.”

That week, we sold our belongings in Pasadena, drove across the country to JFK, and boarded a plane to Russia. It’s been 13 years since then - and we’ve never looked back.

One of my favorite and most meaningful programs is running our overnight camp in Rostov. A couple of summers ago, I got a call from a mother who wanted to sign up her 9-year-old daughter.

“My husband is Armenian,” she said. “And I’m Jewish. I want to let you know that my daughter wears a necklace with a cross as she feels connected to Christianity. Would you accept my daughter even though she wears a cross?”

I apologized to the mother and told her it wasn’t appropriate. “Our camp teaches children about Judaism. I don’t think wearing a cross sends the right message.” I hung up the phone and told my wife about the conversation I had. But my wife felt it wasn’t as complicated as it seemed.

“Call her back,” she told me. “Tell her that her daughter can come!”

I shook my head. “We can’t have a girl walking around wearing a cross at camp.”

“Yes we can,” she argued. “That girl is getting one chance to connect to Judaism. Who is a camp for, if not kids like her?”

I called the mother back. My wife was right, of course. Our goal at camp is to teach Jewish children about Judaism, no matter the circumstance. Sure enough, that summer, little Vika showed up to camp wearing her necklace. It stuck out during davening and was noticeable during learning. But we never said a word.

About a week into camp, Vika’s counselor noticed her taking more interest in learning. We encouraged her to listen closer, to ask questions, and to learn. By the end of the program, Vika was on of our most active campers.

On the last day of camp, when the campers were signing each other’s autograph books and saying their heartfelt goodbyes, Vika turned to her counselor.

“I want a Shema Yisrael,” she said. “Printed out and small enough to fit in my hand.”

Vika explained to her counselor that she intended to read the Shema every night before going to bed, but she wanted it small enough that her father wouldn’t notice. She didn’t want to make him upset. But she still wanted to do the right thing and recite Shema each night.

My last story comes from a woman who my children considered their Bubby. Of course, we don’t have any blood relatives in Russia, but Miriam was a great surrogate grandmother for my children. She was a fiery lady. Extremely passionate and outspoken. She had no family of her own, but was extremely active in our community.

Every Shabbat, Miriam would make sure to be in shul. She would sit down and enjoy the songs of Kabalat Shabbat. “This is my favorite time of the week,” she would say. “When I was younger, I wasn’t allowed to go to synagogue. My university would have expelled me if they found out I practiced religion. But now, coming to shul is my greatest joy!”

Miriam became a permanent member of our family. She shared Shabbos meals with us and told us stories of her childhood.

Miriam struggled financially her entire life. She lived paycheck to paycheck, and when she stopped working, she lived pension to pension. She always told us that she wished to give tzedakah, but unfortunately couldn’t afford to give anything significant. But, one day, only a few months before Miriam passed, she walked into my office and placed a $200 bill on my desk.

I look down at the crisp note. “But this is more than your pension payment!” I argued. “You need this to live.”

Miriam shook her head. “I just received $2000 in reparations from Germany,” she explained. “And for the first time in my life, I can finally give ma’aser!”

I looked up at Miriam in utter disbelief. This $200 could have bought her so much, and she chose to give it to the community.