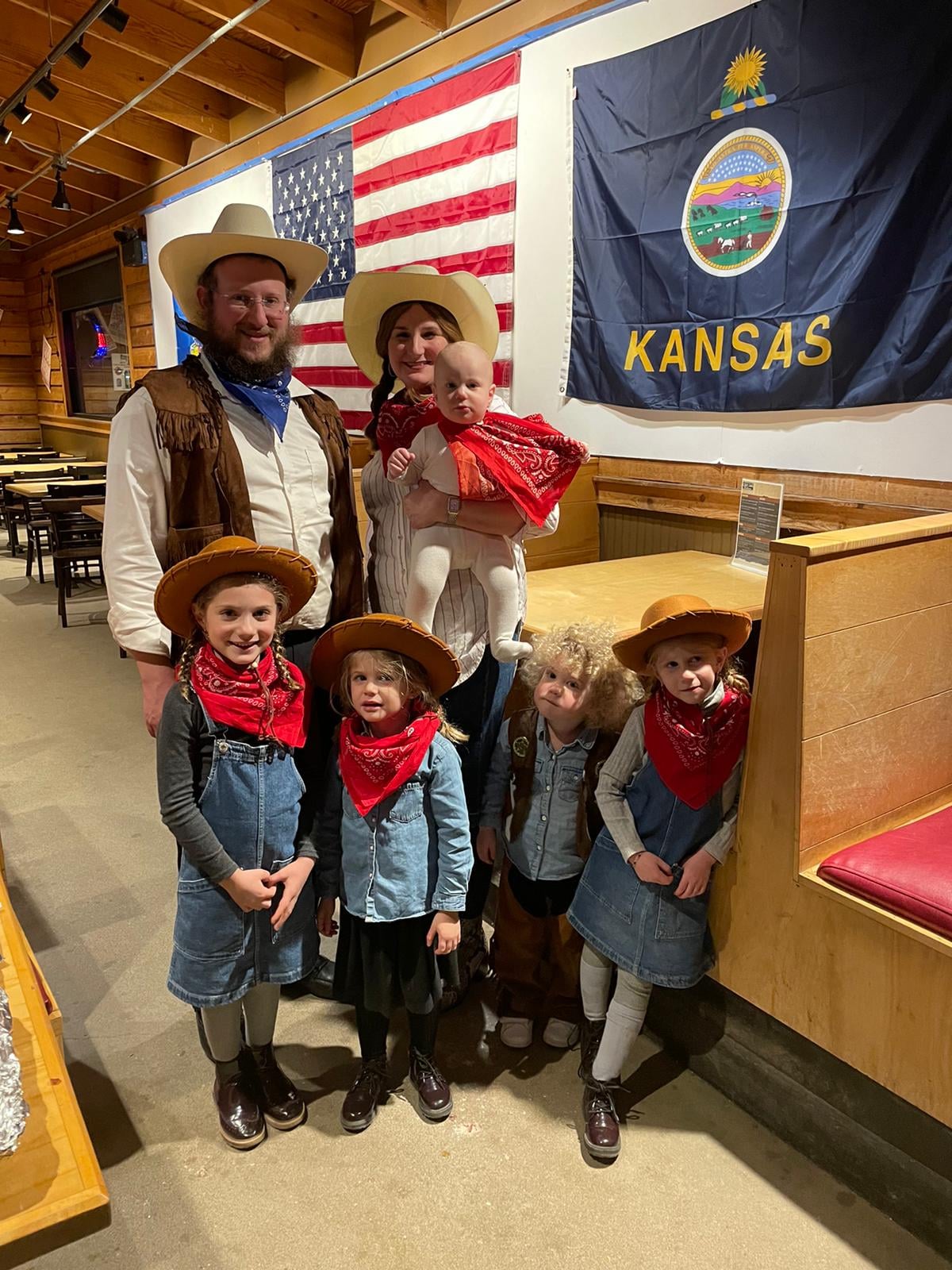 When someone moves to a city where the closest frum family is 180 miles away, they’ve got to have a good reason for it. For Rabbi Greenberg and his wife, they know exactly why they did it. Having both grown up on shlichus, they learned from a very young age that the greatest joy in life is giving to others. And that’s precisely why they parked themselves in Wichita, Kansas. It’s so far from frum Jewish life, but so close to Yidden - Jews who could use a caring friend and some warm, chicken soup.

We would greet people who came to our shuls and stand in front of many Shabbos guests to say divrei Torah. Spending Yom Tov away from home always felt strange because we missed the bustle of our Chabad Houses and shared the joy of Yom Tov with others. Going on shlichus after our marriage felt only natural after growing up that way.

At first, we went to Odessa, Ukraine, to help the shluchim with their orphanage. However, it was a temporary arrangement, so when we heard that shluchim were needed in Wichita, Kansas, we made the move.

We arrived here just three years ago on Rosh Chodesh Elul. Although we were both used to living on shlichus, adjusting to the small town took some time. The closest shliach was two and a half hours away, and we had to have kosher food shipped out to us just to eat supper. Additionally we couldn’t prepare that supper while the kids were in school—because there was no school!

Settling into a new house with our kids home the entire day—while preparing for Rosh Hashana meals and Yom Kippur services in a city where we barely knew anyone—was quite hectic. Add to the mix that my wife was in her ninth month and due to give birth any day, and you can imagine what things were like.

We booked a hotel to host our Rosh Hashana and Yom Kippur programs, but we needed to find people to attend! We had a list of about 30 Jewish contacts in the Wichita area , but most were connected to reform or conservative and were hesitant to join.

So, we tried to find one Jew at a time. We made a website and ran Facebook ads, which attracted a few people. Each one had a friend, and each friend had a friend; slowly got to know more people. Going shopping in the local Costco became an opportunity to ask people if they were Jewish and invite them to join our programs. That first month, our Rosh Hashana and Yom Kippur programs were small, but extremely significant. Everyone who came was thrilled to spend Yom Tov in a meaningful way, and we were happy to be there for them.

A few days after our first Rosh Hashana, a guy pulled up in a broken pickup truck. He said he had connections with the digital billboard company, and he could get us ad space for free! That was a brainer for the new rabbi in town.

Since then, we’ve been putting up plenty of ads before each Yom Tov. We’ll have ten to fifteen ads all around town inviting people to join our events. We even revamp them each day of Chanukah to show the correct number of candles to light!

The ads are everywhere; you can’t miss them! Our community loves it, and many have told me that seeing the ads makes them feel very proud to be Jewish. Who would imagine that a billboard in the middle of Wichita, Kansas, could teach people about Yiddishkeit?

Since the billboards are digital, the people in charge are happy to give extra space for free if they appreciate the excellent work that you do. I’ve told other shluchim about it, and they started doing it as well!

One area that we focus strongly on is the mitzvah of tefillin. One Sunday, a man I’d never seen before showed up to our minyan. I asked him if he wanted to put on tefillin, but he declined. “I won’t ask again,” I told him, “but the offer still stands. So when you’re ready, just let me know.”

He came each week, but he never put on tefillin. A year later, he told me that he was finally ready. He had done his research and was now comfortable with the concept of wrapping up the arm in black leather straps.

“But don’t just put them on me,” he said, “teach me how to do it so that I can put them on myself!” He bought his own pair and started putting on tefillin every day.

After that, he started convincing everybody he knew to put on tefillin! He went around telling people that it changes his entire day and brings blessings into his life. He convinced his brother in Alabama, his friend in Michigan, and I’m sure he’s convinced others that I don’t even know about.

After seeing how putting on tefillin each day had affected him, we started pushing more people in our community to buy tefillin. As a result, at least ten people bought their own! That's no small number in a place like ours.

Another guy considered himself an atheist and didn’t want to hear about tefillin. I told him, “I won’t try to convert you, and you won’t try to convert me!” After I visited him a few times, he became very involved in helping me get a minyan. Two years later, after he convinced one of his friends to join our minyan, he told me, “Alright! If this guy came and put on tefillin, I might as well, too!”

A week before we arrived, a woman from Wichita emailed Rabbi Wineberg in Kansas City. She told him that she was married to a non-Jew, but she had started learning with someone from Partners in Torah and was interested in learning more about Judaism. Rabbi Wineberg told her that she was in luck, because we were heading to Wichita the following week!

She reached out to us right away, and we saw she was serious about this. She’d already stopped driving on Shabbos, and the next thing we knew, she told us that she wanted to separate from her non-Jewish husband! We told her that she shouldn’t take things too quickly, but she was determined to live a fully-Jewish life.

She rented an apartment on our block and came over almost every afternoon to chat with us and help out with our kids. She came to all our shiurim and events, and she learned a lot. Then, when she felt ready to get married again, she was in touch with a shadchan who found her a perfect match. She’s now living a frum life in Texas!

As shluchim, we are here to help any Jew in need. One day, we got a call from someone in New York. His son had been arrested while driving through Kansas. Maybe I could help? I drove down to the jail and said that he could stay in my house when he got out on bail.

When the judge heard that he was shocked. He said he had never seen a clergy member volunteer to take a total stranger into his house! He made his bail exceptionally low, and the boy stayed in my basement for three weeks until he went to a Chabad rehab center. Baruch Hashem, he’s doing so well that he’s now starting an organization to help kids like him!

Another aspect of our shlichus is helping frum business people who come to the area. Although Wichita seems like a pretty isolated place, there are many opportunities here. Frum businessmen come from all over, and they stop by to say hello and get kosher food.

These businessmen don’t just come and then forget about us. They might live thousands of miles away, but they care about our work and give very generously. The amazing Chevre at Recover-Care have really partnered with us in a big way and are helping us buy a property to build a mikvah! The fact that they care enough to get involved and help Yiddishkeit in our small city is incredible.

Because we don’t deal with large numbers here, our work is very individualized and personal. We don’t deal with crowds of people, but with one person at a time. I visit them in their stores and offices, and they love it. Some want to learn Gemara, some Shulchan Aruch, and some just want to talk.

On Fridays, we go around to people’s homes with Shabbat-to-go kits that have challah, soup, and other things for Shabbos. Everyone loves it, and it was a huge hit during Covid. We thought that no one would let us into their homes back then, but many people here don’t have family and were thrilled that someone was coming to visit them! We built a lot of great connections that way.

Speaking of Covid, it actually helped our community expand. Reform and conservative were closed then, so people had no choice but to try us out. Our biggest Rosh Hashana and Yom Kippur turnout was during Covid because we were the only shul that was still open!

In addition to the one-on-ones, we arrange plenty of events for the Jews in Wichita. Each Sunday, we have bagels and lox with a minyan, and we have programs for women every so often.

Each month, we have a pop-up kosher restaurant. We rent a space in a hotel, and people come to eat a delicious kosher meal for only five dollars. We’ve served sushi, deli sandwiches, gourmet hot dogs, and more. You won't find these prices in Brooklyn. People love coming to socialize and eat good homemade food, so we’ve met a lot of special people this way.

We’re also working on expanding the kosher food selection in the local grocery. Until now, we’ve been ordering palettes of kosher food from other cities, but we hope that we won’t have to continue doing that for much longer. I’ve become very close with the local grocery manager, and he’s working hard to get more kosher products on the shelves.

So that’s our shlichus in a nutshell! We might seem far away, but we’re all working toward the same goal of making the world a better, brighter place. We love having guests, so if you ever find yourself in Wichita, Kansas, make sure to stop by! And if you’re hanging around Kansas on March 6, join us at the grand opening of our brand new shul! We would love to greet you.

Rabbi Michoel and Zisel Goldman, Chabad of Kauai, Hawaii - The Westernmost Chabad House in the World

Although Shlichus did not motivate my initial visit to Hawaii, while there, I st

One Cup of Coffee and Cheesecake at a Time - Rabbi Yisroel and Chaya Sara Hahn, Chabad of Spokane, WA

Both of us grew up in Crown Heights, Brooklyn, in the Rebbe’s neighborhood, wh

We Are Firefighters! Rabbi Moshe and Devorah Wilhelm, Portland, Oregon

After we got married in 1980, we moved to Australia for a two-year kollel. We we

Back when my now-husband and I were still just dating, I was the first one to br

Rabbi Yosef and Esther Greenberg, Chabad of AlaskaWalking to shul when it’s ar

Taking the Sin Out of Sin City

St Lucia has a small population of about 180,000, and only a fraction of that is