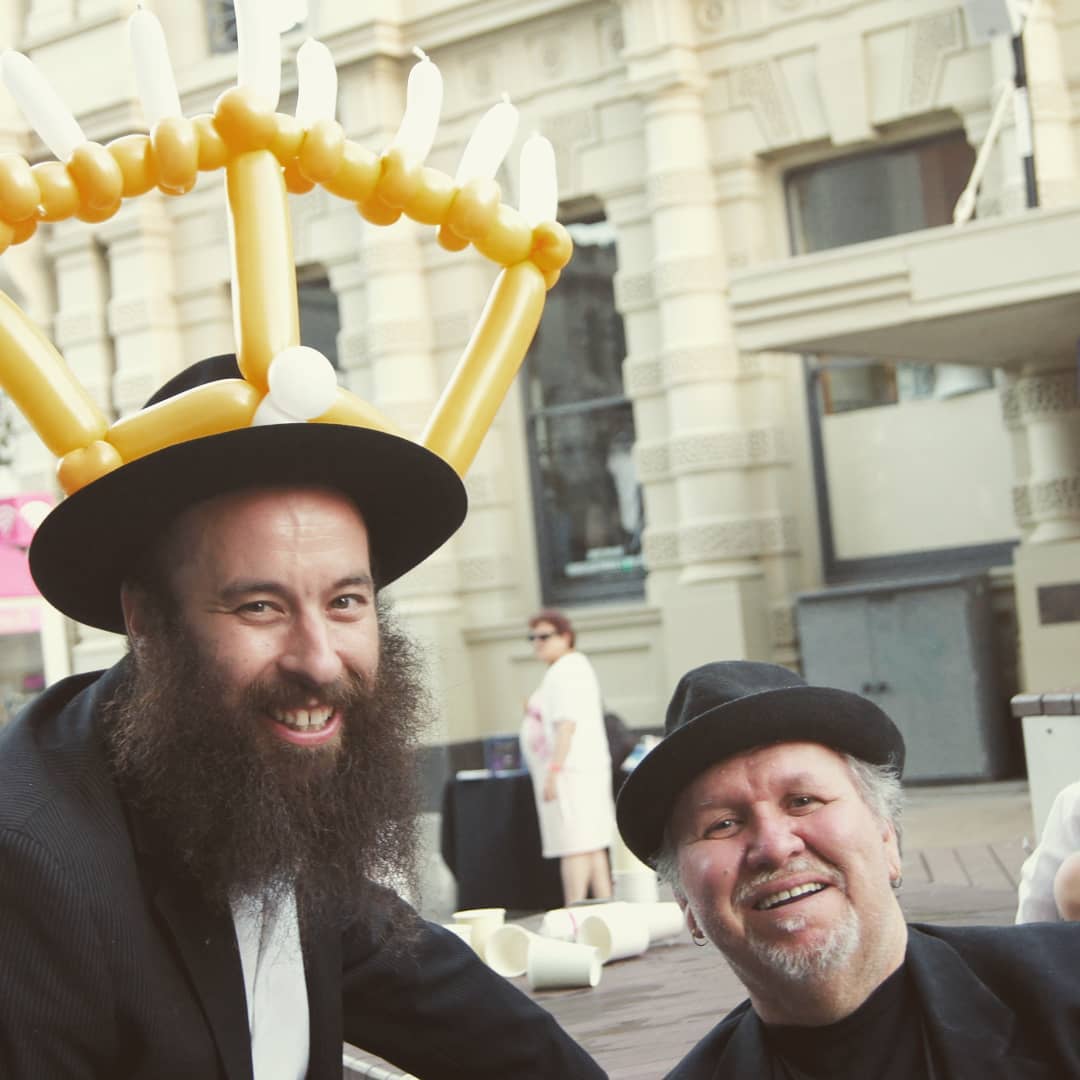 Under the Down Under - Rabbi Yochanan & Rochel Gordon

Being a Shaliach runs in my blood! My father moved to Australia in 1979 to start Kollel Menachem. A few years later, he began helping the Tasmanian Jews with Yamim Noraim and eventually founded a makeshift Chabad there. So it was only natural to me that when I got married and started my own family, I would move to Tasmania and become the first full-time Rabbi living on the 200-mile long “island.”

Today, my family and I have lived in Tasmania for about 11 years. We moved in  2011. While the island is (comparatively speaking) small, reaching the Jewish community doesn’t come without its challenges. I have been known to drive over 700 miles in one week, give shiurim, read megillah, or hand out Matzah – often, with the entire family in tow!

Our family unit is essential - it’s challenging to raise a frum family on an island without frum people. My children are true pioneers. They attend an online school in Eretz Yisroel. Because Tasmania is 9 hours ahead of Israel, they begin their school day at 6 pm and sometimes go as late as midnight. Their commitment to this cause is as important as mine. Plus, there are some bright sides to starting so late; they get a good rest (within reason, of course - we do make sure they keep busy with homework and other tasks).

Many of the Jews of Tasmania have no connection to their Jewish heritage, and their sole connection to the culture is knowing their grandparents identified with it, so not even Rosh Hashana or Yom Kippur mean much to them.

Because of this, during my first week in Tasmania, I began to second guess my purpose on the Island. I wondered if there were enough Jews to justify my relocation. Amazingly, Hashem answered my questions that same week. As we settled into our new home (and invested in new dishes), many items needed to be Toveled. Because there is no shul or Jewish community in Tasmania, I trekked down to the river to dip the dishes there. Little did I know, the river was shallow and muddy. It was certainly not your local kaylim mikvah.

Covered in mud and carrying a drippy bag of dishes, I ran into a strange-looking couple on my way home. I can best describe them by looking straight from the shtetl. The wife stopped me as I walked past and asked if I was a rabbi. I immediately responded yes and told her we had just moved to the area. She seemed to jump at this and dived into a story of growing up in Poland, and she was ridiculed for being the “Jew Girl.”

However, having always believed that her mother wasn’t Jewish, the girl rejected the title. It wasn’t until years later that she discovered the possibility of both her parents being Jewish, and her search into her identity began. Despite not having much information, the internet provided her with a base, and the woman started to keep mitzvot to the best of her understanding. Four months after this meeting, this woman’s six grown sons were a staple in our minyanim, and I learned the true power of being present for the people looking for connection.

Before moving to Tasmania, I met a woman while on one of my trips there. She told me how her sister was dating a Jewish man and, because of this, was looking into giyur. When this woman’s sister told her parents of this decision, their father remembered their mother’s mother to be Jewish. After some digging and document searching, the family confirmed their Jewish ancestry, and the women did not have to go through conversion.

Eventually, when my family and I moved to Tasmania, I made a point to include this woman in all of our emails and events. But having grown up so far removed from Judaism, she never felt comfortable in that identity. So we sent her honey cake before Rosh Hashana and Mishloach Manos for Purim but to no avail. It wasn’t until years later, Baruch HaShem, that this woman decided to pack up her children and join us for Rosh Hashana dinner.

While enjoying sweet Challah with honey, Pomegranates, and then the infamous fish head, I asked each of our guests to introduce themselves and share one Jewish thing that inspires them. We’re used to hearing many different answers. But, when we reached this woman, she said: “The Rabbi and Rebbetzin are what inspire me. For years they reached out despite not getting any answer. The reason I am here is that they showed me they would never give up on me.”

Tasmania can seem random, but there are Jews in every corner of the world. I traveled across the island a few years back, delivering menorahs and kashering factories. When a scheduling issue left me with a large chunk of time in the middle of the day,  instead of wasting that time, I decided to head up to the northwest and visit an individual I knew who lived there. Sadly, he wasn’t home.

My next stop was a random in-middle-of-the-cows-and-no-town-in-sight café that was owned by an Israeli Jew about a half-hour away. We got there quickly and went in to deliver a menorah to the owner. Much to our surprise, the man we went to earlier – the one who wasn’t home – was sitting there drinking a coffee. Beside him was an American Jew and on the table over was another Israeli Jew. It may not have been eight nights of burning candles, but Jews wishing each other a Happy Chanukah in the middle of nowhere was definitely some sort of miracle!

Kashrus has not been easy in Tasmania; the island is the only Australian state without a Kosher section in their supermarkets. I continue to work hard kashering different factories, but the fact remains, it’s not easy.

One of the more difficult times of year is Pesach. Some individuals don’t keep kosher during the year but feel passionate about being Kosher L’pesach. Because of this, I offer Jews in Tasmania to make orders through me, and I fetch them what they need from the mainland when I go to do my shopping.

However, one year, around Purim, Tasmania saw a string of antisemitic attacks - all of which came to a head when a woman began waving a swastika from her home. This terrifying act gained a lot of media attention. Given this, a newspaper that previously ignored my requests for publicity and blatantly posted anti-Zionist pieces was now asking me for an interview. I leveraged this opportunity and agreed to include my Pesach shopping service in the paper.

I was pretty pleased with myself and waited patiently for the article to be published. But as the saying goes, man plans, and G-d laughs. Covid was the only topic any paper cared about by the following week. First, it was the stay home saved lives, followed by lockdowns, and then, our borders were closed. Two weeks before Pesach,  I had no way to get Matzah. Never had I been so desperate for a piece of Matzah!

I tried to get creative, but my solutions didn’t work. I had no way to get to the mainland, and no one could get to me. Deliveries were backed up for weeks, and ferry comers were forced into 2-week quarantines. I started to imagine myself making my own matzah, but that wouldn’t solve the problem of wine!

But thank God for Hasgacha Pratis, because HaShem really was watching. A little bit before Pesach, my interview went live. It was a 12-page story and included my picture. It made headlines! I got a call from a senator a couple of days later who was surprised to learn there was a Rabbi in Tasmania at all. I was happy to introduce myself and even happier to speak with someone who might help with my problem finally.

Within minutes after the senator hung up with me, he contacted the CEO of the ferry company. “We’ll make a one-time exception,” the CEO said. “Send a vehicle on the ferry without anyone operating it, have someone fill it with the things you need, and meet us on the other side.”

To finish, I’d like to share one of my favorite stories. A few years ago, while giving out packages before Pesach, I got a call from a man asking me for some Matzah and wine. I happily agreed and organized a pickup spot with him. A few hours later, a 6’6 monk was standing at my door.

The man reaches out his hand and says: “Shalom Aleichem, my name is Dovid Tzvi!”

Naturally, when a monk introduces himself with a Hebrew name and wants to celebrate Pesach, the only option is to invite them inside. So he sits with me, puts on tefillin, recites shema, and then shares his story.

“I grew up with a very mixed background, constantly feeling caught between Christianity and Judaism. Then, a few years back, I learned in a non-Chabad Yeshiva in Jerusalem and asked many questions. I was feeling lost and was searching for the truth. Finally, a rabbi told me that I could no longer live between both worlds and that I had to choose one, so I chose Christianity! I devoted myself to that life and quickly became a monk.”

I listened to his story and decided to share a different truth. I told Dovid Tzvi that a Jew is a Jew no matter what, and he can always come back home. Today, Dovid Tzvi remains a part of our community and is slowly working his way “home.”