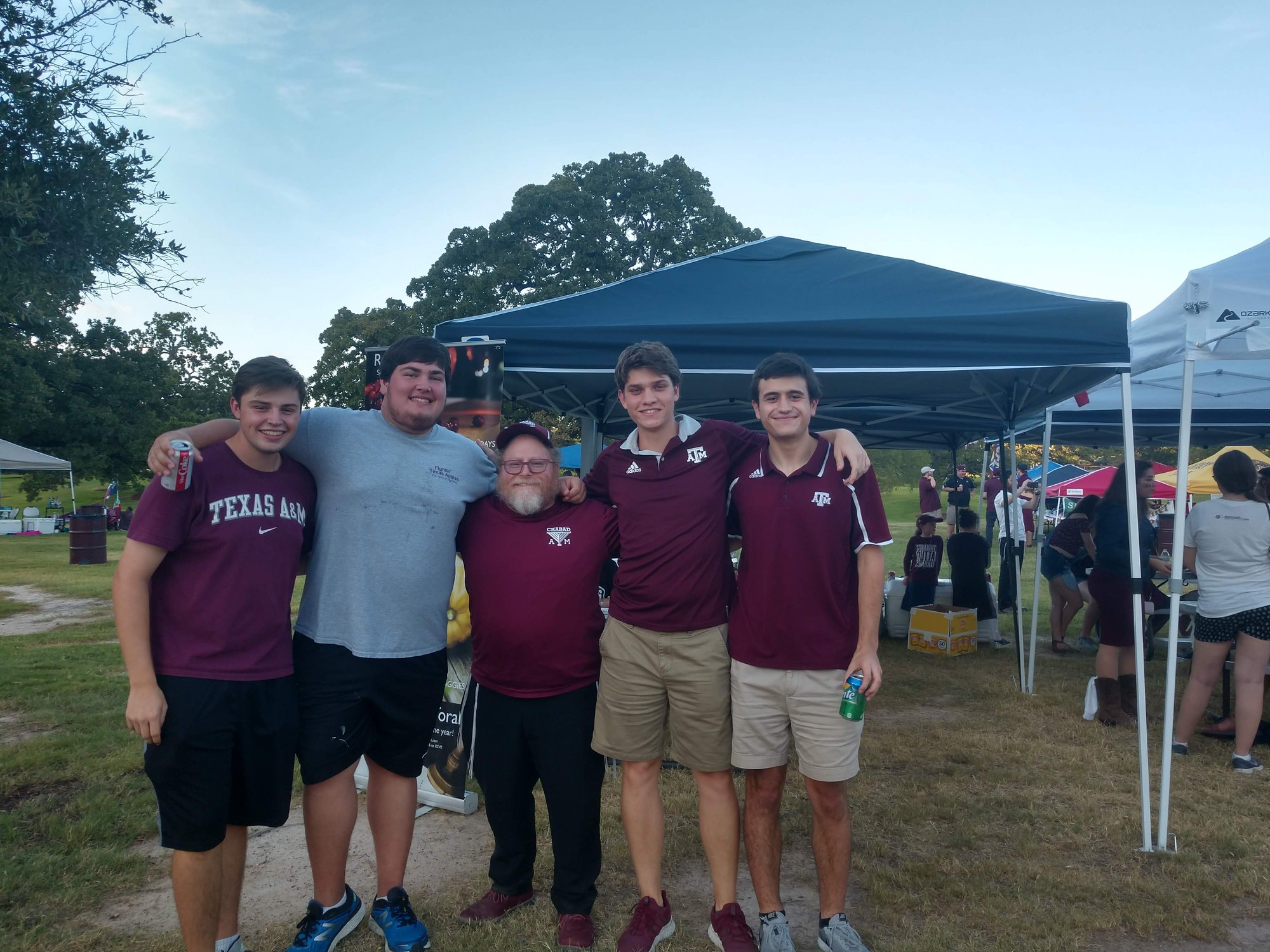 We’ve always known the importance of this shlichus. This move would take us and our three children somewhere with no school, no Mikvah, and 100 miles away from the nearest kosher store. The list of unknowns was immense, but we were prepared to take on the challenge.

When we began reaching out to the students, our first idea was to invite them all for a Friday night meal. The timing wasn’t ideal. It was the dead of summer, and the campus would be populated by a mere fraction of its students; only those taking summer courses. In spite of this, we posted on Facebook, and, to our delight, nine students showed up. Only one had heard of Chabad before. We cherished what he told us.

“When I was a kid, a Chabad sukkah mobile stopped by my school. That was the first time I ever heard about it. Now, the term ‘Chabad’ brings back happy memories for me. I hadn’t thought about it in years - not until I saw your post. That’s why I decided to come,” the student explained.

As a beginner shluchim on campus, this meant so much to us. We understood the power of planting seeds.

Once, we were in the Houston area and recognized a student who was wearing a yarmulke and tzitzit. He was eating at a restaurant. We were surprised because, over the years, we’d reached out to him regularly, but he never responded. When we spoke to him, he told us, “I just wasn’t ready to address Judaisim on a… personal level. But every time I received your Shabbos invitation, your Rosh HaShana flier, or your Chanukah facebook message… Every time I passed the sukka or the Giant Menorah on campus, I felt… proud of who I am. I felt connected to my Jewish heritage. I felt… safe in this otherwise secular space. After I graduated, I started attending classes here in Houston, and I’m continuing to explore my Jewish identity. Your messages put me on the path I’m on today.”

Today, we are in contact with about one hundred and fifty students per year, and host fifty to seventy five students every Shabbos. Each and every Shabbos is magical. A student told us once that, while everyone was singing and dancing, she finally realized that she’d gone the whole semester without exhaling. Finally, she could breathe again.

The students feel pampered when we serve them using real dishes. It made them feel important. This simple detail made the spirit of Shabbos special for them. We figured, since they live in dorms and typically use paper and plastic, this would make Chabad feel like home. After all, home is where you’re treated like royalty. Using real dishes made everyone feel like an honored guest, experiencing a wonderful Shabbos dinner. We wanted to familiarize them with this experience so they could recreate it in their own home.

We were able to continue doing this for the first few weeks, since our dishware set was enough for twenty-four guests, but as the amount of students grew, we felt we had no choice but to switch to disposable. It was just so much work to clean up afterward! But after a while, we decided it was worth it, and a few years ago, my wife and I chose to use real dishes again. Once again, the Shabbos table was beautiful, but it took three days for the cleaning lady to tidy up, even with our family lending a hand. Despite this, we were committed to meeting this standard.

One day, a student brought over her mother, who was visiting. The mother was so grateful that her daughter had a place to meet other Jewish students and enjoy a real Shabbos meal. She saw how busy our household was, and asked how she could contribute. I wasn’t sure what she had in mind, but I suggested that she sponsor the cost of Shabbos at our Chabad House. This is hardly a small donation, considering the cost of feeding the dozens who attend our weekly home-cooked Shabbos meals, but she insisted that she wanted to do more. She then noticed the piles of dishes.

“You need an industrial dishwasher!” she exclaimed. She couldn’t have been more correct. Her generous nature matched her observations. The next week, our shiny, new commercial dishwasher made clean-up so much faster.

Another unexpected - and greatly appreciated - donation to our Shabbos efforts was the industrial stove hood, which our insurance required us to install. We had been putting off this expense, waiting until we had no choice to delay it longer. I wasn’t sure who to call, so in the meantime, I had to order an item from a store, so I rang them first. Unfortunately, the number had been recorded incorrectly, and instead I reached a non-Jewish fellow from San Antonio, who owned a restaurant nearby. He had once asked us about renting parking space on our property.

I realized that I had dialed the wrong number, but as long as he was on the phone, I figured he might have advice to offer regarding acquisition of an industrial hood. It seemed Hashem really was looking out for us - dialing this number was no mistake. Before long, he called back to tell me that he could get us the hood and a friend of his could install it. When I asked him what I would owe him, he said “Don’t worry, it’s on us. I’ll get the hood, he’ll take care of the installation, and it’s a done deal.” I was overwhelmed with shock and gratitude. How what had seemed to be a wrong number ended in us saving thousands of dollars, I have no way to explain. It must have been a bracha from above.

The Houston fellow sent over a worker to iron out the details. I showed him to our kitchen, mentioning that we only need the hood for the oven.

“Then you are Jewish!” I replied.

“My father died when my brother and I were twelve, and we were too poor to even have a Bar Mitzvah.”

“Come, we can have a bar mitzvah right now! I’ll help you put on tefillin,” I told him.

After I explained, he put on tefillin for the first time in his life, and we took a picture. He called me back the next day. I thought it was a work-related call, but he actually had something else on his mind.

“Rabbi, you did me such a wonderful favor. I sent the picture to my ninety-year-old mother. She was thrilled. She’d always felt guilty that she’d never given me a Bar Mitzvah. She was crying tears of joy!”

Matzah ball soup has a wondrous healing effect, one that goes far beyond Shabbos. One day, we noticed that a student we’d never spoken to had posted that she wasn’t feeling very well. Naturally, any student away from home, craves tender, loving care, especially one who is sick. I quickly responded and offered some nourishing, hot, kosher soup. Now, fast forward two years later, shortly before her graduation, she spent Friday night with us. At one point, she suddenly got quite emotional.

“You guys really are saving lives,” she commented emphatically. Humbly, we explained that we were just doing what we always do. “No!” she insisted. “You actually save lives. Remember that time you came over with that matzah ball soup? I was sick, I was lonely, and had just heard some bad news from my family. I felt isolated and ignored. I was so heartbroken that I was planning to… end my life. …then, you sent a message asking me if I wanted soup. I said yes, but really all I wanted was to know that I wasn’t alone. Thank you. You provided that for me.”

Mikvah has always been a major issue for us. Whenever we had to go, we had to drive all the way to Houston. Around a year and half ago, I went to the Ohel. We hadn’t had any children for over 11 years, which was  something we really desired. Additionally, we wanted to build a Mikvah, which was no small task in our little college town.

Our trip to the Ohel blessed our family, and this last year, we had a beautiful baby girl. Shortly afterwards, a property near our home went up for sale. We knew right away that this would be our Mikvah.

One of our goals for the Mikvah was to use it as an educational center. We’d already been conducting Mikvah tours for our students in Houston and had long since learned never to underestimate the impact of a Mikvah tour. Many Jewish students know nothing about taharas hamishpacha - these tours can be an incredibly eye opening stepping stone for many students and their Jewish growth. For example, we met a - now fully observant - former student on a street corner in Crown Heights. Her tour seemed to completely change her life, reinvigorating her faith. And just recently, we received a phone call from a shlucha who was surprised when two girls, who had studied in A&M, had asked her to prepare them for marriage, explaining they’d attended a particularly inspirational Mikvah tour.

We are astonished and delighted to report that, shortly after we began working on the Mikvah, we received a number of phone calls from potential University and business employees, inquiring if there was a Mikvah in town. With the Mikvah as our latest project, we know we are on the right track.